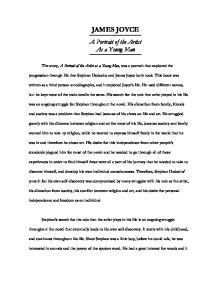 A Portrait of the Artist As a Young Man.

JAMES JOYCE A Portrait of the Artist As a Young Man The story, A Portrait of the Artist as a Young Man, was a portrait that explored the progression through life that Stephan Dedaelus and James Joyce both took. This book was written as a third person autobiography, and it explored Joyce's life. He used different names, but he kept most of the main details the same. His search for the role that artist played in his life was an ongoing struggle for Stephan throughout the novel. His alienation from family, friends and society was a problem that Stephan had because of his views on life and art. He struggled greatly with his dilemma between religion and art for most of his life, because society and family wanted him to take up religion, while he wanted to express himself freely in the world that he was in and therefore he chose art. His desire for this independence from other people's standards plagued him for most of the novel and he needed to go through all of these experiences in order to find himself these were all a part of his journey that he needed to take to discover himself, and develop his own individual consciousness. Therefore, Stephan Dedaelus' pursuit for his own self-discovery was compromised by many struggles with his role as the artist, his alienation from society, his conflict between religion and art, and his desire for ...read more.

Does a tiny particle of consecrated bread contain all the body and blood of Jesus Christ or a part only of the body and blood? (Page ???) Every decision he made against the church, and every sin he committed, the community would get involved and try to get him out. However, he rarely took their advice and therefore was alienated even more from society for being different and wanting to explore new ideas of the world, as well as his role as the artist. All of his decisions that he made throughout his life all contributed to his alienation from friends, and family. Stephan's alienation from society allowed him to pursue his own desires, and although it was at the cost of his acceptance to society, it all lent a great deal toward finding himself and opening more doors to his self-discovery. Stephan's struggle between religion and art showed the contrast of society vs. personal independence that caused much difficulty for Stephan in his search for self-discovery. It all started with his childhood upbringings with religion, and his childhood interest in words. Throughout Stephan's childhood, religion had been engrained into his mind as the last word. His mother was a devout Catholic, and his father followed religion very strictly as well. All throughout his childhood, he was exposed to religious events, the clergy, and even the idea of priesthood. ...read more.

All of these decisions, however led to many hardships as well for Stephan, however, they also led to his self-discovery by taking huge leaps into his own world. With all the experiences Stephan experienced, with his role as the artist, his alienation from society, friends, and family, his conflict between religion and art, as well as his desire for independence and freedom, he was able to find his place. After experiencing each one of these aspects of his life, he was better able to understand who he was, and thus, opened his eyes to his own self-discovery. James Joyce told a story of his life through a third person view of his own life. He transformed his own life story and experiences into this fictional character named Stephan Dedaelus. Joyce made interesting views of his own life throughout the book, and he emphasised that in order to know who you are, and truly what your place on earth is, you must step back, take a look at it all, and decipher all your decisions and experiences that have shaped you into who you are today. IT was a masterful piece of writing that gave you a sense of personal understanding with the character because of how well it was described and Joyce tried to make it that way so that we could all understand his message, and so that we could all look at our lives from a third person, like Joyce, and we can discover who we truly are! ...read more.