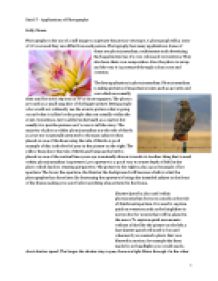 ﻿Unit 57 - Applications of Photography Holly Chunn Photography is the use of a still image to captivate the person viewing it. A photograph tells a story of it?s own and they can differ from each person. Photography has many applications. Some of these are photojournalism, architecture and advertising. Each application has it?s own codes and conventions. They also have their own composition. How the photo is set up and the way it is portrayed through colour, tone and contrast. The first application is photojournalism. Photojournalism is taking pictures of important events such as poverty and war which are usually then used for news reports on TV or in newspapers. The photos are used as a small snapshot of the bigger picture letting people who would not ordinarily see the events, picture what is going on and what it is like for the people that are actually within the event. Sometimes, text is added underneath as a caption but usually it is just the picture on it?s own to tell the story. The majority of photos within photojournalism use the rule of thirds as your eye is naturally attracted to the main subject when placed on one of the lines using the rule of thirds. A good example of this is the bird of prey in the picture on the right. The yellow lines show the rule of thirds and because the bird is placed on one of the vertical lines your eye is naturally drawn towards it. Another thing that is used within photojournalism is aperture. Low aperture is a good way to create depth of field in the photo which leads to creating perspective. ...read more.

I think they have done this so that the first thing you notice is his body and how starving he is before you see anything else. Your eye then sees the makeshift shack just behind him then it travels to what looks like another person in the distance down beside the shack. High aperture is used here, probably one of the highest at either f24 or f32 as the whole photo is clear and at a higher aperture the longer the depth of field is resulting in the background being clear and not blurred. They could have used shutter speed as the man looks as if he was in the middle of crawling across the ground. If they have then fast shutter speed has been used, somewhere up between 1/250 and 1/500. Fast shutter speed is likely to have been used as it can be used in a natural composition meaning that the photo would not need to be set up. This photo follows the conventions of photojournalism as it is black and white emphasising the horror and misfortune in the photo. This photo does show timeliness as things like this happen almost everyday and are frequently shown on the news and this photo shows exactly what is usually shown on the news and in the newspapers. It is a very clear and true representation of what horrors go on in Africa and other poor countries everyday making it show another one of the three most important things in photojournalism which is objectivity. It also has a strong narrative and generally makes people want to help out these countries and stop poverty and hunger from happening to so many unfortunate people. ...read more.

I think the colour of the can has been slightly emphasised as well to make it look more appealing and have the appearance that you need the product. To the left is another good example of advertising photography. You can tell at first that it is targeted towards women as the background is a pastel pink colour. You can also tell this as the product itself is a shade of pink and one of the connotations of pink is femininity. The model shown in the corner of the advert has been airbrushed in Photoshop to be the ultimate model of perfection fooling the reader or viewer into thinking that if they buy the product then they will look like the model in the advert. By airbrushing the woman it makes her look flawless and makes her skin look smooth. Her eyes have also probably been touched up making them seem brighter and more vibrant. Everything in this advert has been set up and it has all been posed for. Using this method, the photographer would take hundreds of photos at different angles and with the model pulling different poses before selecting one or more for the final production of adverts to make sure that everything looks perfect. Aperture and shutter speed may be used within advertising photography for a clear and crisp picture that is always good when taking pictures of models and the products in adverts as well. Overall, there are many different uses for photography and the 3 that I have looked at are quite similar in the techniques that are used. Aperture and shutter speed are both used commonly throughout the photos to create different effects within each group. Each use has at least one unique technique to separate it from the rest. They each are very good outlets for photography and each achieve their codes and conventions named. ...read more.