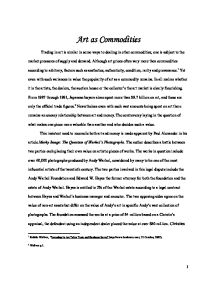 Art as Commodities Trading in art is similar in some ways to dealing in other commodities; one is subject to the market pressures of supply and demand. Although art prices often vary more then commodities according to arbitrary, factors such as aesthetics, authenticity, condition, rarity and provenance.1 Yet even with such variances in value the popularity of art as a commodity remains. In all realms whether it is the artists, the dealers, the auction house or the collector's the art market is clearly flourishing. From 1987 through 1991, Japanese buyers alone spent more than $8.7 billion on art, and these are only the official trade figures.2 Nevertheless even with such vast amounts being spent on art there remains an uneasy relationship between art and money. The controversy laying in the question of what makes one piece more valuable than another and who decides such a value. This insistent need to reconcile both art and money is made apparent by Paul Alexander in his article Murky Image: The Question of Warhol's Photographs. The author describes a battle between two parties each placing their own value on artistic pieces of works. The works in question include over 60,000 photographs produced by Andy Warhol, considered by many to be one of the most influential artists of the twentieth century. The two parties involved in this legal dispute include the Andy Warhol Foundation and Edward W. Hayes the former attorney for both the foundation and the estate of Andy Warhol. Hayes is entitled to 2% of the Warhol estate according to a legal contract between Hayes and Warhol's business manager and executor. The two opposing sides agree on the value of non-art assets but differ on the value of Andy's art in specific Andy's vast collection of photographs. The foundation assessed the works at a price of $4 million based on a Christie's appraisal, the defendant using an independent dealer placed the value at over $80 million. ...read more.

Under such laws an artists work, logo, signature, and persona can be protected. Through the publics increased association between popular celebrities and consumer products, services, businesses or institutions character merchandising has become very popular.6 For example the estates of Warhol and Picasso could market products under their personas due to their celebrity status. The article Character Merchandising: The Marketing Potential Attaching to a Name, Image, Persona or Copyright by Robert G. Howell narrates the detailed means of protection available to a celebrity in protecting their persona from being exploited unjustly. Such laws include copyright law which protect the celebrity. The aspects of a celebrity's persona that are covered under the law are human, non-fictitious persons, human fictitious characters, and non-human fictitious characters The term celebrity in this context consists of athletes, actors, entertainers and other well known figures in the public sphere.7 The only individuals who are excluded from protection under copyright law are political celebrities as they raise their own special considerations. Howell's article uses the term celebrity broadly encompassing all the figures mentioned above but we will use the term celebrity and artist interchangedly as this will provide a better illustration of the concepts and arguments already presented in this essay. Under copyright law if an artist's work is used without permission relief can be sought under the law. Ultimately the artist has a moral right to the integrity of their work. Such a right is infringed if there is damage to the honour or reputation of the artist. Such an infringement may include distorted, mutilated, or other modified versions of the artists work, and/or the work being used in association with a product, service, cause or institution without the artist's permission.8 Such an infringement of the integrity of the artists work could have been cited by Picasso's heirs against the boutique at the Guggenheim Museum. The boutique had for sale products derived from the artist that didn't respect his original work. ...read more.

The flood of Picasso related products will make his work available to the common person decreasing the value and popularity. The estates of such influential artists such as Picasso should be guided by experts instead of being left in the hands of novices. Such individuals in the attempt to uphold the traditional of the art will end up destroying it. Protection of art is overseen by copyright law which upholds the artist's integrity to his work. This protects work from being copied and provides a remedy if such a thing occurs. Sometimes though copyright protects thieves as it did in the late 19th century in America. It was here that trademarks were stolen from the identities of others and claimed by manufacturers as their own. Throughout these four articles you see how art has become a business. Art is no longer merely for aesthetic beauty instead there are now legal and financial elements to consider alongside the beauty or originality of a work. Art has joined a marketplace where stealing, undervaluation, overvaluation are common occurrences. This is the world of art as a commodity. In closing I leave you with this expert taken from Walter Benjamin's essay The Work of Art in the Age of Mechanical Reproduction which best captures the essence of this argument. If the concept of 'work of art' can no longer be applied to the thing that emerges once the work is transformed into a commodity, we have to eliminate this concept with cautious care but without fear, lest we liquidate the function of the very thing as well. For it has to go through this phase without mental reservation, and not as noncommittal deviation from the straight path; rather, what happens here with the work of art will change it fundamentally and erase its past to such an extent that should the old concept be taken up again - and it will, why not? - It will no longer stir any memory of the thing it once designated. ...read more.