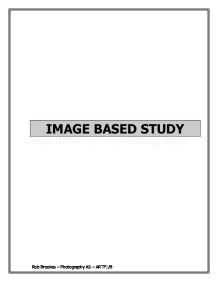 AS Photography - Image based study

IMAGE BASED STUDY In the next section of the project I will look at the work of other still life photographers but in particular we will concentrate on the works of Edward Weston and Irving Penn. I want to analyze their photographs looking into their choice of subject matter, the composition and lighting of each piece, how it was taken and then finally see how the decisions and choices they have made can influence the work I am about to undertake. I want to look at the style of each of the photographers (they are both working in the same genre i.e. still life but their approach to the topic and the subject matter itself vary greatly) comparing them and then developing my ideas. In the first project I looked at the works of other photographers to see their techniques and understand how they achieved their photographs. In this project I want to look at my influences and look at why they have taken their photographs. The Empty Plate, New York, 1947 Irving Penn I have chosen this photograph as the starting point in my research as it shows how an effective image can be created using very little in the way of subject matter. Penn has used only a few well chosen and composed objects to create a very memorable image (and one that is in its own way very familiar to us all). Penn has used the tablecloth in the image as a canvas on which he has composed his piece, with the dirty plate and crumpled napkin (although of pretty much the same tone) standing our through their look and texture. By including the edge of the table in the shot he has given the picture depth (if he had not done this he would have risked the photograph look flat and uninteresting), it also helps draw the views eye to the main subject in the piece (the plate) by using the dark, almost black tone to (in a way) ...read more.

Instead of taking the photograph from the side (as would be common with nautilus shells) in this photograph he has decided to photograph the image head on. This has given the shell an almost surreal quality, and has allowed for many different interpretations of the photograph with people seeing the shell as different objects. He has forced us to look at a recognizable object in a new and interesting way. Weston has been very subtle with this image for instance he has given the photograph a sense of depth through the inclusion of a very faint line in the background of the picture (about a quarter of the way up the picture from the bottom), this was in fact the edge of the oil drum Weston had perched his shell upon. This helps to in turn give the shell a sense of depth. Again he looks at the beauty of nature in the image (in a similar way to he did in his photograph the toadstool) and the viewer is charmed with shape, texture and form rather than a direct message about the shared experience of life. Composition with Skull and Pear, 1979/1981 Irving Penn This photograph is a perfect example of the use of composition in still life photography and is in a way a departure from Penn's other pieces. As opposed to the work we have seen by Weston (where his subjects are often solitary and the focal point of the photograph is clear) this work is in a way enhanced by the amount of different components that make up the image. The work is a menagerie of contrasts, natural items (for example the skull or the pear) are set along side manmade items (the metal sewing machine or the jug), light objects (the clear white jug or the skull) are placed amongst darker items (the dark pear or the wine bottle for example) ...read more.

and has used it to evoke memories and feelings from peoples past. It also asks questions of the viewer in a similar way to Penn and Weston in that although the art mimics a pharmacy in every detail it is not a chemist, it makes that viewer ask what exactly it is that makes a room a room and how much is a sense of place defined by its contents. As with still life photography, Installation art depends on a participation from the viewer. The piece is what it is, it is in the reaction, feelings or questions that it evokes in a person that define it and raise it above the commonplace into a work of art. My Bed, Tracey Emin, 1999 I have included this (infamous) piece of installation art by the modern artist Tracey Emin as I believe it too is an example of the use of composition is work and is in its own way a still life. Although the piece looks chaotic it is all planned and every item has its place (as opposed to the work by Hirst where the composition relies on it being an exact replica of a pharmacy the composition in this piece relies on the appearance of chaos). The whole installation has had its composition organized to evoke a reaction from the viewer. In a similar way to Penn and Weston Emin in this work makes you look at the familiar in a new and interesting way. Although the image is a common one (everyone is used to seeing a just slept in bed), this is not your bed and in reality you are seeing it for the first time (even though it seems familiar). The piece evokes feelings of confusion but also (as with the still life photographs we have looked at) makes you question your preconceptions on exactly what can be seen as art. ...read more.