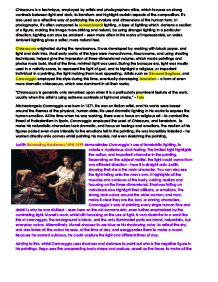 Chiascruro is a technique, employed by artists and photographers alike, which focuses on strong contrasts between light and dark, to transform and highlight certain aspects of the composition. It's also used as a effective way of portraying the curvature and dimensions of the human form. In photography, it's often compared to remembrandt lighting, a type of lighting which darkens a section of a figure, making the image more striking and natural, by using stronger lighting in a particular direction. Lighting can also be ambient - seen more often in the works of impressionists, on water. Ambient lighting gives a softer, more natural feel. Chiaroscuro originated during the renaissance. It was developed by working with black paper, and light and dark inks. Most early works of this type were monochrome. Mocronome, and using shading techniques, helped give the impression of three-dimensional volume, which made paintings and photos more bold. Most of the time, minimal light was used. During the baroque era, light was mostly used in a nativity scene, to represent the light of god, and to highlight a religious, or important individual in a painting, the light making them look appealing. Artists such as Giovanni Baglione, and Caravaggio employed this style during this time, eventually developing tenebrism - a form of even more dramatic chiaroscuro, which was dominant in all their works. "Chiaroscuro is generally only remarked upon when it is a particularly prominent feature of the work, usually when the artist is using extreme contrasts of light and shade." - Tate Michealangelo Caravaggio was born in 1571. ...read more.

Whilst Caravaggio and other chiaroscuro artists used blacks and dark, sad colors as the shadow, impressionists use the blue of the sky to reflect on other surfaces, leaving the end result looking brighter and fresher. Claude Monet was born in 1840. Monet was the main founder of French impressionism - ('impressionism' taken from the title of one of his paintings - 'impression, sunrise'), and renowned for staying firmly in that style, working outside and employing all the techniques. He studied the works of John Constable, William Turner, and Joseph Mallord, whom all inspired him to focus on the colors the light casts over a landscape.(left: Wivenhoe Park, John Constable) Showing his use of lighting and reflections on the lake. Whilst Monet's lighthearted, romantisised scenes of water, landscapes, and reflections were very popular, he did receive critisim from a humorist, Louis Leroy, who critisised the whole movement for looking unfinished, too simple. He also critised the 'lack of workmanship' that went into the pieces. He remarked in an article, regarding Monet's work. "Impression-I was certain of it. I was just telling myself that, since I was impressed, there had to be some impression in it ... and what freedom, what ease of workmanship! Wallpaper in its embryonic state is more finished than that seascape" When, in 1923, Monet had an operation to remove his cataracts, it was found that the reddish tones he often used in paintings disappeared, and Monet began using more blue, and other colors. It's thought that Monet may of even be able to see ultraviolet light, which would of certainly affected his color perception. ...read more.

Whilst caravaggio was praised for his extremely life-like, realistic figures, Rego's are almost cartoon-like, which makes them look less appealing. I chose these three artists to study because they focussed most on the techniques of light and dark in their paintnigs to establish a a mood and feel. My favoruite is caravaggio, because I like the stark contrast and detail he can get, by highlighting certain areas and figures, and I also appreciate the accuracy in his work. I also like Monet's work, because of the way he captured and exaggerated certain colors brought on by the time of day, and the subject matter, and then utilized these to give the paintnig a distinctive feeling. Although I'd prefer to focus on figures for this project, as I have mostly done patterns and objects so far, and I think it would be good for me to try and paint a person. I also think It would be cool to try and distort Caravaggio's technique, and prehaps use more color instead of black shadow, so the paintnig looks more upbeat, and I could capture a particular time of day whilst keeping the impact from using a singular stark light source. I don't really want to paint any cartoon-similar paintings, like paula rego, because the idea doesen't really appeal to me, and I think the way she does figures is really unattractive, yet really intriguing. She has inspired me to prehaps try and distort a body using light, which would look really effective. I'm not sure if I want to use impressionist paintnig styles, as I prefer to have a smooth surface, and getting accuracy, without having to use techniques such as impasto, but I think I could use it on sections, for a more effective image. ...read more.