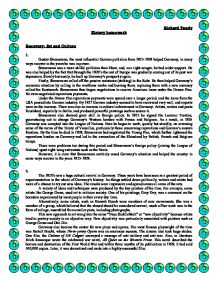 Gustav Stresemann, the most influential German politician from 1923-1929 helped Germany, in many ways recover in the years he was in power.

Richard Tandy History homework Recovery: Art and Culture 1. Gustav Stresemann, the most influential German politician from 1923-1929 helped Germany, in many ways recover in the years he was in power. Stresemann was a more skilful politician than Ebert, and, as a right-winger, he had wider support. He was also helped by the fact that through the 1920's the rest of Europe was gradually coming out of its post war depression. Slowly but surely, he built up Germany's prosperity again. Firstly, Stresemann called off the passive resistance (striking) in the Ruhr. He then helped Germany's economic situation by calling in the worthless marks and burning them, replacing them with a new currency called the Rentemark. Stresemann then began negotiations to receive American loans under the Dawes Plan. He even negotiated reparations payments. Under the Dawes Plan reparations payments were spread over a longer period, and the loans from the USA poured into German industry. By 1927 German industry seemed to have recovered very well, and exports were on the increase. There was also an increase in cultural achievement in Germany. Artists, writers and poets flourished, especially in Berlin, and produced powerful paintings such as source A. Stresemann also showed great skill in foreign policy. In 1925 he signed the Locarno Treaties, guaranteeing not to change Germany's Western borders with France and Belgium. As a result, in 1926 Germany was accepted into the League of Nations. Here he began to work, quietly but steadily, on reversing some of the terms of the Treaty of Versailles, particularly those concerning reparations and German's eastern frontiers. ...read more.

To conclude, on the whole, the darling lifestyle and ideas which characterised 1920's Berlin were not to be found in other parts of Germany where people were shocked by the liberal attitudes, to them and many others Berlin was seen as sleazy, corrupt and sex-obsessed. In reality, back home not much of a recovery had been made what so ever and things seemed to have gone from bad to worse between the years of 1923-1929. What can you tell about Weimar Germany from its culture? Painting 1. Source 1 is a painting called Grey Day, painted by George Grosz in 1921. Grosz had been wounded in the war and often shows war disabled in his paintings, along with robot-or doll like figures who seemed to have no control over their lives, such as the figures painted in source 1. Also, just like source 1, his characters are placed in hectic and depressing cities. In the picture there are three symbolic characters who each represent an area of German society. The character in the background represents a working class person, the man in the foreground represents an upper-class person who is wearing a badge that shows he supports the monarchy instead of the Republic, and the man in the middle of the picture looks like he has dueling scars, which would make him a member of the military class. 2. Source 2 is a collection of three paintings called Big City, painted by the artist Otto Dix in 1927-1928. He searched for personalities he could include in his paintings to show the uglier side of human nature. ...read more.

Indeed, with these significant developments in painting, the cinema, architecture, design, the theatre and other fields, throughout the 1920's Berlin challenged Paris as cultural capital of Europe, with its vibrant and creative society and famous nightlife. However, as with so many other features of Weimar Germany, there was tension and conflict just below the surface, this beckoned as extremists opponents of the Weimar government were just below the surface and through the 1920's they were organizing and regrouping, waiting for the chance to win power. In reality the 1920's would be a time of tense and dramatic political problems. In addition, much criticism came to the changes being produced in the Weimar Republic. This criticism came from extremists groups including the Communists on the far left wing and more importantly the Nazi Party on the right and the culture of the Weimar Republic later became a target for them during the period of the Third Reich. Criticism also came from ordinary people in Germany who were not impressed by the results that were being produced. In addition, there was a big contrasting gap in Germany between the people who had money, the upper class and the people who had very little, the working class. Also, the people with money probably had no concerns for the people without. Moreover, the darling lifestyle and ideas which characterised 1920's Berlin were not to be found in other parts of Germany where people were shocked by the liberal attitudes, to them and many others Berlin was seen as sleazy, corrupt and sex-obsessed. Many people were worried. In reality, in many ways sections of the German society (Nazi Party) were definitely corrupt and others were most certainly rotten. ...read more.