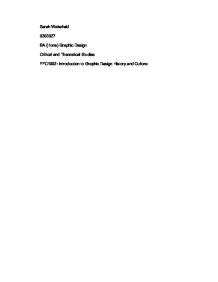 How did Pop break down the barriers between 'high' and 'low' culture? Discuss with reference to specific practitioners and their work.

Sarah Wakefield 0303927 BA (Hons) Graphic Design Critical and Theoretical Studies FFC1002: Introduction to Graphic Design History and Culture How did Pop break down the barriers between 'high' and 'low' culture? Discuss with reference to specific practitioners and their work. Pop art originated in the 1950s/1960s as a reaction to the post war consumer society. The movement was a result of changing tastes and the increasing influences of American society and culture on Britain. During the Second World War, Britain suffered huge economic losses which had a direct effect on the growth of mass culture. In contrast, America was able to maintain economic growth and this meant that there was rapid growth in consumerism. At this time there was a distinct difference in what the classes considered 'entertainment' which was referred to as 'high' culture and 'low' culture. Low culture was considered to be kitsch - things in low culture were popular with the masses and in poor taste, these included things such as popular music and cinema. High culture was considered to be things which attracted the upper classes, such as fine art and theatre. During this essay I will be looking at several British Pop Artists and their work and referring to some American pop artists and their work, to help illustrate the differences between the social classes after the second world war and to show how the movement helped to destroy these ideas and boundaries. It is important to determine that pop art produced by British artists is very different from that produced by American pop artists. ...read more.

American artists such as Andy Warhol were popular in Britain as well as America. Warhol took the idea of high and low culture and challenged it in order to make art. His images were reproductions of popular images, often of popular figures or products, making them appeal to the youth market. The post war youth had a disposable income for the first time, which ultimately led to the rise in consumerism in Britain. Consumerism meant that products had a short shelf life and so the idea of a throw away society was coined. The older generation began to become concerned that British society was becoming too americanised. This made big British corporations like the BBC fear that they would lose authority and so the generation gap was established. The older generation of Britons were still recovering from the war which had hit the British economy hard. People of this generation were still trying to cling on to the things that they had and were less ready to accept new ideas. Warhol's images of popular American stars such as Marilyn Monroe (see figure 3) and Elvis Presley (see figure 4) helped to contribute to this idea and fed the youth culture market on both sides of the Atlantic. His style of overlapping and layering multiple copies of the same image is now one of the most recognised of all pop art. During the 1950's, the British pop artists, including Peter Blake, Eduardo Paolozzi and Richard Hamilton were creating the guidelines for British pop art by either celebrating or criticising mass culture. ...read more.

in order to break down barriers between high and low cultures it is important to give them something in common or to impose the cultural ideas of one class onto another. This is essentially what happened with pop culture in the 1950s and 60s. Popular culture became so mainstream and so popular among the masses that it was difficult to escape. Pop art appealed to the younger audiences, who had broader and more open views, while still appealing to the older generation, who were more set in their ways. Popular music, cinema and fashion spanned many social classes, particularly in the youth market and it was no longer necessary to distinguish a person's social class through what they wore. So in a way pop art was imposing itself onto the masses by dealing with subjects which pleased them but in an inoffensive way. Richard Hamilton's quote when referring to the 'This is Tomorrow' exhibition best helps to show this when he described it as 'expendable, witty, sexy, glamorous' meaning that it is easily forgotten while still possessing the qualities to charm and engage the audience. This huge shift in what was included in art and what was seen and used to make art, helped to break down the barriers between high and low culture. This essentially would not have been possible without the rapid growth of consumerism after the war, which made things in mass culture so available and so popular. It is also due to the youth culture that these barriers were broken down. Had it not been for their disposable income and interest in new technologies, fashions and products then mass culture would have had such a dramatic affect on society.. ...read more.