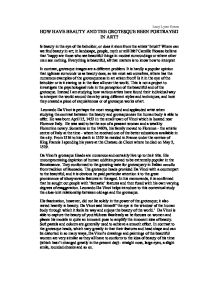 How have beauty and the grotesque been portrayed in art?

Lucy Lynn-Evans HOW HAVE BEAUTY AND THE GROTESQUE BEEN PORTRAYED IN ART? Is beauty in the eye of the beholder, or does it stem from the artists' brush? Where can we find beauty in art; in landscape, people, myth or still life? Camille Picasso believe that 'happy are those who see beautiful things in modest surroundings or where other men see nothing. Everything is beautiful, all that matters is to know how to interpret In contrast, grotesque images are a different problem. It is hardly a popular opinion that ugliness surrounds us as beauty does, so we must ask ourselves, where has the numerous examples of the grotesqueness in art arisen from? Is it in the eye of the beholder or is it staring us in the face all over the world. This is not a project to investigate the psychological role in the perception of the beautiful and of the grotesque. Instead I am studying how various artists have found their individual way to interpret the world around them by using different styles and techniques, and how they created a piece of exquisiteness or of grotesque works of art. Leonardo Da Vinci is perhaps the most recognised and applauded artist when studying the contrast between the beauty and grotesqueness the human body is able to offer. He was born April 15, 1452 in the small town of Vinci which is located near Florence Italy. He was said to be the son of a peasant woman and a wealthy Florentine notary. Sometime in the 1460's, his family moved to Florence - the artistic centre of Italy at the time - where he received one of the better educations available in the city. ...read more.

Beardsley had an amazing talent in being able to capture the utterly grotesque and the stunningly beautiful in a single line. In many of his later works, Beardsley's tendencies to the grotesque, the erotic in a corrupt way, and the amoral are more pronounced than in his earlier work. Yet throughout there is a power to his work that could not be ignored. To quote from Walter Crane: 'His work shows a delicate sense of line, and a bold, decorative use of solid blacks, as well as an extraordinarily weird fancy and grotesque imagination, which seems occasionally inclined to run in a morbid direction... ...there appears to be a strong mediaeval decorative feeling, mixed with a curious weird Japanese-like spirit of diablerie and grotesque, as of the opium-dream.' In Beardsley's illustrations the clothing is generally long and flowing, on the females and starched and crisp on the males. This consequentially gives an air of sophistication, authority and beauty. On the more grotesque characters are long shorts that go in at the knee or more ragged clothes. This method of using clothes to distinguish between the beautiful and the grotesque, the poor and the rich and the powerful and the weak has been used throughout the centuries. William Beech (1753-1839) adopted this technique in his painting 'Portrait of Sir Francis Ford's children giving a coin to a beggar. In the eighteenth century the upper class regarded the lower class as almost grotesque while they remained the vision of beauty. This is powerfully conveyed through the clothes and colour of the skin. The children are seen here, giving a beggar money as the Lord Ford himself would never been seen doing it himself as this was completely against the society of the upper class. ...read more.

Nash has depicted perfectly the destruction man brings upon this world. I have observed the same theme -less dramatically- around the area where I live. If a lush, full forest is compared to the car parks and Tesco's of urban London, I feel appalled at how ugly and grotesque we have made our world. We have fazed out organic shapes and greenery and brought in strict symmetry and dull colours. The buildings surrounding Hammersmith have harsh lines and are built purely for convenience and practicality rather than for any form of aesthetics. Even though the architects may push at incorporating the idea of beauty, they have failed miserably when their creations are put side by side with the immense beauty of nature. It is possible that the reason something is beautiful in the figurative world is similar to what makes a landscape beautiful. Organic curves and shapes with no harsh lines or symmetrical straight edges. A grotesque landscape -similar the grotesque figure-, however, is distorted and battered with dark colours associated with decay and gloom. Countless artists have tackled beauty and grotesqueness using many techniques and styles. There is one clear theme running through all aspects of art depicting one of these two extremities; this is that beauty takes it's own form in the real world, in nature, in youth, in women and in organic, whole shapes. Beauty's opposite however, takes the form of decay, the effect of age, haggard lines and crumbling images. Whether applying it to faces, landscapes or the clothes people wear, beauty and grotesqueness lie in the same places. Maybe this is not a question of art, but one of psychology. Possibly the artists draw on all the aspects that each human being inertly regards as grotesque or utterly beautiful and it is then easy for them to conjure up a desired grotesque or beautiful image. ...read more.