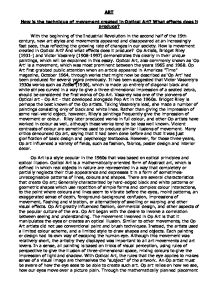 How is the technique of movement created in Optical Art? What effects does it produce?

ART How is the technique of movement created in Optical Art? What effects does it produce? With the beginning of the Industrial Revolution in the second half of the 19th century, new art styles and movements appeared and disappeared at an increasingly fast pace, thus reflecting the growing rate of changes in our society. How is movement created in Optical Art? And what effects does it produce? Op Artists, Bridget Riley (1931-) and Victor Vasarely (1908-1997) demonstrates this clearly in their unique paintings, which will be explained in this essay. Optical Art, also commonly known as 'Op Art' is a movement, which was most prominent between the years 1965 and 1968. Op Art first grabbed public attention when an article appeared in Americas "Time" magazine, October 1964, through works that might now be described as 'Op Art' had been produced for several years previously. It has been suggested that Victor Vasarely's 1930s works such as Zebra (1938), which is made up entirely of diagonal black and white stripes curved in a way to give a three-dimensional impression of a seated zebra, should be considered the first works of Op Art. Vasarely was one of the pioneers of Optical art - Op Art - that developed alongside Pop Art in the 1960s. ...read more.

His first exhibition contained many different patterns such as zebras and chessboards. In the late 1940s Victor focused on paint geometric abstraction that promoted Op Art in the 1950s with compositions based on different kinds of patterns. The basic components were squares, circles, and triangles, and horizontal and vertical parallel lines; by drawing lines at varying distances from one another and introducing undulations, Vasarely created the illusion of three-dimensional space. He later introduced vibrant colours, which further enhanced the optical illusion. In their fully developed form, Vasarely's geometrical abstractions produce mesmerizing, almost hallucinatory effects. Throughout the 60's his style could be compared to that of Bridget Riley who exploited colour and the creation of space by it. She was also interested in optical effects, in the early 60's she worked initially in black and white and then onto colour by 66. Her work follows the same pattern as Vasarely and like Vasarely her work shows a complete mastery of the effects characteristic of Op art. Artists such as Riley influenced Vasarelys use of colour and with these two artists on the scene together the genre of Op art begun. During the 1960's and 70's his optical images became part of the popular culture, having a deep impact on architecture, computer science, fashion and the way we now look at things in general. ...read more.

event rather than an appearance - these forces can only be tackled by treating colour and form. Bridget Riley 'I want my paintings to exist on their own terms. That is to say they must stealthily engage and disarm you. There the paintings hang, deceptively simple - telling no tales as it were - resisting, in a well-behaved way, all attempts to be questioned, probed or stared at and then, for those with open eyes, serenely disclosing some intimations of the splendours to which pure sight alone has the key.' - Bridget Riley Quote from this book: The Eye's Mind: Bridget Riley. Collected Writings 1965-1999. Edited by Robert Kudielka. The reason I was attracted to Vasarelys and Rileys work was due to the outstanding dazzling optical effects producing movement created in so many of their entirely unique paintings. The portrayal of movement is important in art to produce outstanding effects, visual perspective and to create meaning. Op Artists would manipulate our eyes by repeating and/or distorting patterns with lines, colours, and shapes to produce visual illusions. By doing this they were experimenting with three dimensionality on a two dimensional space. This work was always non-representational. Bold geometric patterns create the illusion of movement in some cases and depth in others. ...read more.