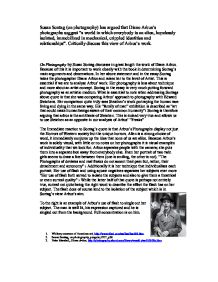 Susan Sontag (on photography) has argued that Diane Arbus's photographs suggest &quot;a world in which everybody is an alien, hopelessly isolated, immobilized in mechanical, crippled identities and relationships&quot;. Critically discuss this view of Arbus's work

Susan Sontag (on photography) has argued that Diane Arbus's photographs suggest "a world in which everybody is an alien, hopelessly isolated, immobilized in mechanical, crippled identities and relationships". Critically discuss this view of Arbus's work. On Photography by Susan Sontag discusses in great length the work of Diane Arbus. Because of this it is important to work closely with the book in determining Sontag's main arguments and observations. In her above statement and in the essay Sontag takes the photographer Diane Arbus and raises her to the level of Artist. This is essential if we are to analyse Arbus' work. Her photography is less about technique and more about an artist concept. Sontag in the essay is very much putting forward photography as an artistic medium. What is essential to note when addressing Sontags above quote is that she was comparing Arbus' approach to photography with Edward Steichens. Her comparison quite truly sees Steichen's work portraying the human race living and dying in the same way. His "family of man" exhibition is described as "art that could make human beings aware of their common humanity"1 Sontag is therefore arguing that arbus is the antithesis of Steichen. This is indeed very true and allows us to use Steichen as an opposite in our analysis of Arbus' "Freaks" The Immediate reaction to Sontag's quote is that Arbus's Photographs display not just the Horrors of Western society but the unique horrors. ...read more.

They are not portrayed as freakish but the oddity is slight and notable. "immobilized in mechanical, crippled identities and relationships" The latter half of Sontag's argument suggests something repetitive about the people she photographed. That their lives are dull and meaningless. This side of her argument has its weaknesses, as most of her freaks ways of life could not be called repetitive. Where this side of the argument is most strong is in Arbus's portrayal of normal people, the people who are not drag queens, midgets or twins. An example would be the Westchester family photo shown here. This shows the Dull banality of middle class suburbia, the relationship between the family is a disconnected one. The boy plays in the pool while mother and father sun themselves. 4. Susan Sontag, on photography, penguin,1977, p32 5. Susan Sontag, on photography, penguin,1977, p33 6. Peter Marshall, Diane Arbus, http://photography.about.com/library/weekly/aa110600c.htm While Sontag's argument is strong it can be criticized for being too direct and aggressive in its analysis of Arbus's methods. Arbus had a great fascination for freaks "I just used to adore them. I still do adore some of them. I don't quite mean they're my best friends but they made me feel a mixture of shame and awe." Surely we could then dismiss her style for merely being obsessive and impulsive, less thought out and directional. Sontag in her essay suggests that Arbus was "A photographer venturing out into the world to collect images that are painful"7. ...read more.

The optimism of artists was that things could be conveyed, through the new mediums that were presented to them. Then with realisation in the early seventies that actually some things cannot be conveyed, they can only be suggested. This idea suggests that Diane Arbus was searching for more than just to portray "a world in which everybody is an alien" that she was perhaps looking to find why these people do what they do, and why it makes them happy. Diane Arbus's quote below strongly suggests this, and I believe this the important part that Sontag has missed. "Most people go through life dreading they'll have a traumatic experience. Freaks were born with their trauma. They've already passed their test in life. They're aristocrats."13 This quote kills Sontags argument, as it paints the freaks of Arbus's world as super-human, that they have found happiness in this world. They have found their role in life, as this quote suggests "Arbus's sitters feel compelled to look, compelled by the very roles they assume" 14 Since the book On photography was published many of Sontag's key arguments have been questioned or overturned, and several contradictions between the different essays in the book have been pointed out. This would lead to question even more her views on Diane Arbus. Even with criticism, her arguments are thought out and well defended, and Sontag has perhaps succeeded in at least bringing Photographers such as Diane Arbus into the forefront of Art photography. 12. Richard Avedon and Doon Arbus, the sixties, Jonathon Cape London, p72 13. Diane Arbus Quote resource http://www.masters-of-photography.com/A/arbus/arbus_articles2.html 14. John Haber, Don't look back, http://www.haberarts.com/arbus. ...read more.