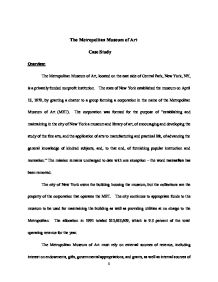 The Metropolitan Museum of Art Case Study Overview: The Metropolitan Museum of Art, located on the east side of Central Park, New York, NY, is a privately funded nonprofit institution. The state of New York established the museum on April 13, 1870, by granting a charter to a group forming a corporation in the name of the Metropolitan Museum of Art (MET). The corporation was formed for the purpose of "establishing and maintaining in the city of New York a museum and library of art, of encouraging and developing the study of the fine arts, and the application of arts to manufacturing and practical life, of advancing the general knowledge of kindred subjects, and, to that end, of furnishing popular instruction and recreation." The mission remains unchanged to date with one exception - the word recreation has been removed. The city of New York owns the building housing the museum, but the collections are the property of the corporation that operates the MET. The city continues to appropriate funds to the museum to be used for maintaining the building as well as providing utilities at no charge to the Metropolitan. The allocation in 1991 totaled $15,633,609, which is 9.3 percent of the total operating revenue for the year. ...read more.

Each member is given 15 invitations to a special showing. Museum Shops - Retail Shops are operated within the museum, at the Cloisters, and in 10 off-site locations. Four of these satellite shops are in New York: Rockefeller Center, New York Public Library, the American at Manhasset, and Macy's. Two are in Connecticut: Stamford Town Center and Westfarms Mall. Two are in California: Century City Shopping Center in Los Angeles and Southcoast Plaza in Costa Mesa. One is in Ohio at Columbus City Center, and one is in New Jersey at the mall at Shorthills. The museum's stores sell greeting cards, posters, calendars, postcards, sculptures, glass, and jewelry. The museum is required to pay income taxes only on retail items unrelated to its mission. Restaurants - The museum operates a restaurant, cafeteria, and bar. Problem and Decision Till the change of directors of the MET, Thomas Hoving who managed MET between 1967-1990, was seen as a publicity seeking showman. He made some expansion projects and some excessive acquisitions. These actions concluded in a financial crisis and the solution came again from him: Blockbuster events. These temporary events held high rates of attendance and increased the revenues of the MET. ...read more.

These events not only generate revenue but also draw the attention of different and new portions of the population. This new audience can be converted to a new, permanent, art conscious population; if they start to be used to go to museums via these large events. Populism can be criticized for hours, but when we talk about the money and profits, we need it. MET Today The Museum ended fiscal year 2004 with a deficit of $4.8 million, following deficits of $1.8 million and $5.2 million for the two previous years. The overall number of members grew by almost 1 percent to 117,805; from 2003 to 2004. The greatest growth in membership was in the MetNet category, which experienced a 12 percent increase in 2003. MetNet is an online source for the MET, to generate income where people can just contribute to the museum with their credit cards instead of going to the museum or making a money transfer between bank accounts to make a donation. The collection of fifty-three Impressionist and Post-Impressionist paintings, valued at $1 billion, donated by Walter H. Annenberg in 1991, has become the property of the Metropolitan Museum of Arts as recently he passed away (October 2002). ?? ?? ?? ?? 10 1 ...read more.