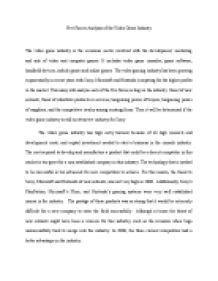 ﻿Five Forces Analysis of the Video Game Industry The video game industry is the economic sector involved with the development, marketing and sale of video and computer games. It includes video game consoles, game software, handheld devices, mobile games and online games. The video gaming industry has been growing exponentially in recent years with Sony, Microsoft and Nintendo competing for the higher profits in the market. This essay will analyze each of the five forces acting on the industry: threat of new entrants, threat of substitute products or services, bargaining power of buyers, bargaining power of suppliers, and the competitive rivalry among existing firms. Then it will be determined if the video game industry is still an attractive industry for Sony. The video game industry has high entry barriers because of its high research and development costs, and capital investment needed to start a business in the console industry. The cost required to develop and manufacture a product that could be a decent competitor in this market is too great for a non-established company in this industry. ...read more.

If anything, video game consoles are edging out personal computers in the gaming industry because of their superior graphics and game experience. There is also a high switching cost to costumers because they would have to spend more money if they decide to change their video gaming experience from a video game console to a personal computer, making the threat of substitutes low. In 2008, the bargaining power of buyers did not play a huge role in the video game industry. There was a large number of very intrigued buyers who were willing to pay the requested amount of money for the video gaming consoles. Therefore, Sony, Microsoft and Nintendo faced low pressure from their buyers. On the contrary, suppliers did have an effect on the video game industry. Software suppliers, who develop the technology for these consoles, have a low switching cost as they can use their products in other electronics including televisions, and especially personal computers. Therefore, they impose a high bargaining pressure on the video gaming companies. ...read more.

All these factors resulted in Nintendo?s Wii dominating sales and surpassing Sony?s by an impressive ratio of 2:1. With the competition in the video games industry getting more intense, the next steps of the video game companies become more crucial for their positioning on the market. Due to the low product differentiation, the next market leader will be the platform provider that manages to offer an innovative gaming experience and a wider population of buyers that include all demographics. Although the industry is being totally dominated by Nintendo?s console, the industry is still considered to show a relatively high level of profitability for other companies. Therefore, Sony should not leave the market, but they should implement new strategies in order to gain a competitive advantage. Sony?s strategy should focus in developing a console with higher technology than its competitors, an innovative gaming experience that would attract more clients and a range of games directed towards the interests of a wider target group that includes females and older people. ...read more.