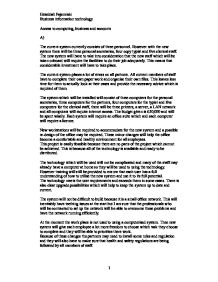 Access to computing, business and accounts A) The current system currently consists of three personnel. However with the new system there will be three personal secretaries, four copy typist and five clerical staff. The new system will have to take into consideration that the new staff which will be taken onboard will require the facilities to do their job adequately. This means that considerable investment will have to take place. The current system places a lot of stress on all partners. All current members of staff have to complete their own paper work and organise their own files. This leaves less time for them to actually look at their cases and provide the necessary advice which is required of them. The system which will be installed will consist of three computers for the personal secretaries, three computers for the partners, four computers for the typist and five computers for the clerical staff, there will be three printers, a server, a LAN network and all computers will require internet access. The budget given is �50,000 and will be spent wisely. Each system will require an office suite which and each computer will require a licence. New workstations will be required to accommodate for the new system and a possible re-design of the office may be required. These minor changes will help the office become a comfortable and healthy environment for all employees. This project is easily feasible because there are no parts of the project which cannot be achieved. This is because all of the technology is available and ready to be distributed. The technology which will be used will not be complicated and many of the staff may already have a computer at home so they will be used to using the technology. However training will still be provided to ensure that each user has a full understanding of how to utilise the new system and use it to its full potential. ...read more.

The new system will have to be maintained. This will include backing up data which is saved on the network and solving any errors which may occur while the network is running. It is a very important factor because without adequate maintenance the network will be very difficult to work with and important information could be lost. To do this a professional team of network professionals will be contracted to ensure that these task are completed and any problems are quickly resolved. This team of network specialist will also update the Anti-virus software. This is equally as important because if the Anti-virus software is not up to date then the network will be vulnerable to virus and other malicious software which could damage the network and cause a mountain of problems such as lost data which can have devastating effects on the firm. The staff training for how to use the new system will include training on how do basic task using the software which will be provided when the network is up and running, connecting to the internet, printing, scanning and faxing documents, health and safety regulations, security procedures, use of projector and projector screen, saving data to the network, how to report a problem, network rules and regulation and general new information about the new system will be passed on to the staff members. Also part of the training will include motivation of the staff. This is important because there will be so many changes that the staff will need to be motivated so that they are working to the best of their ability and utilising the new system. The staff will also need to be confident that the new system works properly. Hopefully the staff will be confident in the system after they have been trained to use it and this will motivate them to get more work completed because they will be aware of the benefits which come from using a computerised system. ?? ?? ?? ?? Hezekiah Fajemisin Business information technology 1 ...read more.