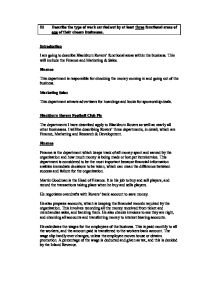 B1 Describe the type of work carried out by at least three functional areas of one of their chosen businesses. Introduction I am going to describe Blackburn Rovers' functional areas within the business. This will include the Finance and Marketing & Sales. Finance This department is responsible for checking the money coming in and going out of the business. Marketing Sales This department attracts advertisers for hoardings and looks for sponsorship deals. Blackburn Rovers Football Club Plc The departments I have described apply to Blackburn Rovers as well as nearly all other businesses. I will be describing Rovers' three departments, in detail, which are Finance, Marketing and Research & Development. Finance Finance is the department which keeps track of all money spent and earned by the organization and how much money is being made or lost per item/service. This department is considered to be the most important because financial information enables immediate decisions to be taken, which can mean the difference between success and failure for the organization. ...read more.

This may be the business that sponsors Rovers, e.g. Bet24. It receives money from Bet24 for having their logo printed on its football shirts. It may also borrow money from a loan company, for extra players or a new service. Most businesses have a program to do some of their banking, and big organizations have special software, created by software designers, to suit their banking needs. The Finance Department is in charge of the payment to the insurance companies and road tax of the company cars it provides to Rovers' employees. Rovers also have full responsibility of any accidents the drivers of the company cars has. The rovers also have coaches and minibuses for students who take tours and for the players who travel to other cities to play matches. Marketing and Sales Marketing and Sales is the department that is concerned with identifying what the customer needs and providing it. ...read more.

This may also attract more people to go to the rovers to watch a match, and that is their main objective. Rovers may also play competitions etc. which again will attract more spectators. The department also sets prices for advertising at certain areas around the ground. The cost is based mainly on the amount of money that area makes and how many visits it gets. The marketing department will have to undertake some market research to see which area performs the best. The worst performing area will be set at a cheap price and the highest performing area will be set at a high price. The department also arranges loyalty cards for its loyal and valued members. One example of this is the Seasons ticket holders' scheme loyalty scheme to reward financially those supporters who have held a season ticket for the past three seasons. This is a good scheme as it encourages spectators to hold a season ticket for three years to reap the benefits. This, in turn, brings in more money and attracts more spectators. ...read more.