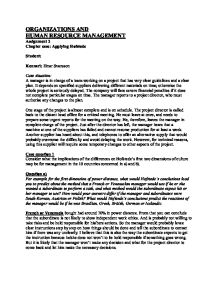 ORGANIZATIONS AND HUMAN RESOURCE MANAGEMENT Assignment 2 Chapter case: Applying Hofstede Student: Kennari: Einar Svansson Case situation: A manager is in charge of a team working on a project that has very clear guidelines and a clear plan. It depends on specified suppliers delivering different materials on time; otherwise the whole project is seriously delayed. The company will face severe financial penalties if it does not complete particular stages on time. The manager reports to a project director, who must authorise any changes to the plan. One stage of the project is almost complete and is on schedule. The project director is called back to the distant head office for a critical meeting. He must leave at once, and needs to prepare some urgent reports for the meeting on the way. He, therefore, leaves the manager in complete charge of the project. Just after the director has left, the manager hears that a machine at one of the suppliers has failed and cannot resume production for at least a week. ...read more.

But it is likely that the manager won't make any decision and what for the project director to come back and let him make the necessary decisions. South-Korean, Austrian or polish. South-Korean and the polish were very similar in power distance or around 50 %, the Austria was very different there the power distance was only 9%. So the method they would use is probably very different. It can be concluded from this that the South-Korean and Polish managers will use a similar method as the French and Venezuelan. They too are not likely to show independent work ethics but not as resilient as the French and the Venezuelan. So the managers would probably call the project director and ask for his opinion on the mater. The subordinate would want clear message like the ones from French or Venezuela, although they are more likely to make independent decisions if a problem arises and will not have to ask the manager about every little thing. ...read more.

Like stated earlier the Icelandic one is in my opinion much like the Austrian. He is likely to show independent work ethics, willing to take risks and take responsibility for their actions. So the Icelandic manager will take the necessary decision whit out hesitation. He will trust the subordinate so he will tell him what needs to be done in short. That is also what the subordinate would want. The project manager would probably not be informed un till he came back, the manager would just have done what he taught was necessary to keep the product line going. Question b Repeat your answer based on the case situation and the Hofstede model and measures for the second dimension of uncertainty avoidance for the 10 nations in a) There seems to be a connection between Uncertainty avoidance and power distance. When the power distance is high the uncertainty avoidance is high as well. So the answers won't have changed. In my opinion is that the uncertainly avoidance is a result of power distance. ...read more.