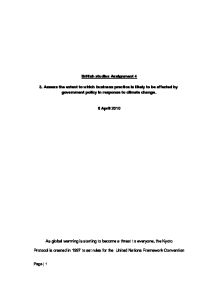 Assess the extent to which business practice is likely to be affected by government policy in response to climate change.

British studies Assignment 4 3. Assess the extent to which business practice is likely to be affected by government policy in response to climate change. 8 April 2010 As global warming is starting to become a threat to everyone, the Kyoto Protocol is created in 1997 to set rules for the United Nations Framework Convention aimed to flight global warming, trying to reduce 5% of greenhouse gas by 2012 compared to 1990. After the protocol is made many countries have take action adding new policies and legislation to businesses, public sector and mainly on energy intensive industries. The government also build couple non profit organisation aim to "provide specialist support to help business and the public sector cut carbon emissions, save energy and commercialise low technologies." (www.carbontrust.co.uk) for example organisation like carbon trust, Department of Energy and Climate Change, carbon footprint and many more. In this paper I am going to relate the climate change government policy on businesses that is mainly related to the manufacture industry and see the affect it brings on these businesses. I will show both negative and positive policies that will affect the business relating it to the current situation. ...read more.

(www.decc.gov.uk) Many firms will decide to take part in this agreement however most aluminium, glass, steel, paper and many more manufactures are still going beyond their given limit of pollutant emission. This will decrease their quantity of products being made and will lead to a decrease in profit. Firms could purchase more pollutant emission through the emission trading system (EU) which started in 2005; firms with left over amount of pollutant emission could sell their leftover to other firms, the price is set by government, in "April 2006 the price is �30 per tonne which was the highest ever and in September 2007 was �0.10" (www.emissionstrading.com). When this scheme first started the cost were too high for firms to purchase as global emission starts to reduce so did the cost. The forestry industry plays a large role in the climate change programme as forest should be use to help achieving the Kyoto Protocol as trees act like a lung to the environment but at the same time there is a high demand on timber. An organisation named 'confederation of paper industries (CPI)' is form working on behalf of all the UK paper related industry to defend its interest in the same time helping the environment. ...read more.

The climate change programme all started from the Kyoto Protocol in 1997 which is an international agreement to create a framework to help the climate change issue aiming to reduce 5% greenhouse gas by 2012 compared to 1997, individual countries then start developing their own policies. The three most important policies and legislation in the UK will be the climate change levy, climate change agreement and the EU emissions trading scheme, a new policies Carbon Reduction Commitment will be introduce in April 2010 which will also be a major policies for big organisation. After policies has been brought in businesses start to have been given many restriction on how much they can produce or use each month which will reduce the profit and if they wishes to go beyond the limit they will have to purchase quota from other firms. Many business organisation leader and non government organisation have an aversion to the whole programme thinking it is inequitable and many query of where the money is being used. On the other hand the programme is achieving their objective of reducing greenhouse gas emission. Reference Houses of Parliament (2004), Number 213 Climate change and business, The Parliamentary Office of Science and Technology, London. http://www.carbontrust.co.uk/about-carbon-trust/what-we-do/pages/default.aspx http://www.carbontrust.co.uk/policy-legislation/Energy-Intensive-Industries/Pages/climate-change-levy.aspx http://www.carbontrust.co.uk/policy-legislation/business-public-sector/pages/building-regulations.aspx http://www.decc.gov.uk/en/content/cms/what_we_do/change_energy/tackling_clima/ccas/what_are_ccas/what_are_ccas.aspx http://www.emissionstrading.com/Energy/?page=Renew_UK http://www.carbontrust.co.uk/policy-legislation/Business-Public-Sector/Pages/carbon-reduction-commitment.aspx http://www.paper.org.uk/current_issues/energy.html ?? ?? ?? ?? Page | 1 ...read more.