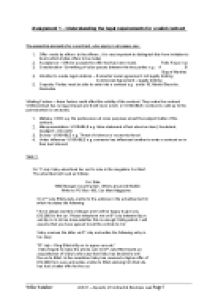 Assignment 1 - Understand the legal requirements for a valid contract

ï»¿Assignment 1 – Understanding the legal requirements for a valid contract The essential elements for a contract, who apply in all cases, are: 1. Offer- made by offeror to the offeree , it is very important to distinguish this from invitation to treat ( which invites offers to be made) 2. Acceptance – Offeree accepts the offer that has been made. Rolls Royce Car 3. Consideration- Something of value passes between the two parties e.g.: A B Bag of Marbles 1. Intention to create legal relations – Domestic/ social agreement: not legally binding Commercial Agreement – legally binding 2. Capacity- Parties must be able to enter into a contract e.g. under 18, Mental Disorder, Alcoholics Vitiating Factors – these factors could effect the validity of the contract. They make the contract VOID(contract has no legal impact and it will never exist) or VOIDABLE ( contract is valid up to the point at which is set aside). 1. Mistake- VOID e.g. the parties were at cross purposes about the subject matter of the contract. 2. Misrepresentation- VOIDABLE e.g. false statement of fact about an item ( fraudulent, negligent , innocent) 3. Duress- VOIDABLE e.g. Threat of violence or economic threat 4. Under Influence- VOIDABLE e.g. someone has influenced another to enter a contract no in their best interest. Task 1 On 1st July Vicky advertised her car for sale in the magazine Car Mart. The advertisement read as follows: For Sale 1992 Morgan Countryman. Offers around £10,000. Write to PO Box 100, Car Mart Magazine. On 2nd July Elliot posts a letter to the address in the advertisement in which he states the following: “I have always wanted a Morgan and I will be happy to give you £10,000 for the car. Please telephone me on 8th July between 8p.m. and 9p.m. to let me know whether this is enough, failing which, I will assume that you have agreed to sell the vehicle to me”. ...read more.

The case here is the same as the one mentioned above because it is outlined that the service promised by Meg, Adam and Matt were delivered and John is legally required to pay them the original agreed price. The case could have been avoided if John had calculated all of the funds that he has before the start of the project, however as I have explained above that all the debts were settled a legal action against John could not be undertaken. He cannot be forced to pay the full amounts as he did not know that he will inherit £100,000. It will be fraudulent to Charlotte if John tries to attain the full amount and go back on his word as in the case of Hirachand Punamchand v Temple where it was held that to do this the money lender was committing fraud on the father. Therefore the above stated legal action is the only one that could be undertaken in regard with this outcome. Task 4 A group of twenty work colleagues enter into a weekly lottery competition each paying £2 a week, All entries are made in Elyot’s name. One week they win £20,000 but Elyot refuses to share the winnings. The other members of the syndicate wish to obtain their share of the winnings so they seek your advice. There are two types of agreements :- 1. Commercial Agreements- the presumption is that they are legally binding (unless there is evidence to suggest they are not) 2. Domestic Agreements – between friends/family the presumption is that they are not legally binding (unless there is evidence to suggest they are) In this scenario as the colleagues did not make a legally binding contract however their case is considered to be more than a domestic agreement, therefore they do have a legally binding power to make Elyot pay them a portion of the £20,000 winnings. ...read more.

The place never floods? would apply to the case of Scott v Hansen 1829 where some land was described as being ?uncommonly rich and fertile?. The claimant sued to have the contract set aside after his purchase of the land, on the basis that this was misrepresentation. The case was held that this was an advertising puff and not a statement of fact, therefore the contract cannot be terminated. So Boromir?s statement is an advertising puff rather than a statement of fact. As in the case of Bisset V Wilkinson 1927, this statement ( ?The average output is 10 tons per day?) made by Boromir would be seen as fraudulent mispresentation and is merely an opinion and not fact. This would be seen as a false statement of fact as in the case of Smith V Land House Property Trust 1889. Gandalf would be fully aware of the conditions of the quarry and no false statements of fact would have been made. As it has been checked by the expert the quarry would have no reason to misrepresent Gandalf. If Gandalf purchased the quarry in its current state it would be seen as innocent misrepresentation as in the case of Attwood V Small 1838, this means that Gandalf would only be able to claim damages under restuited integrum if the quarry could not be restored to its original position (which is impossible). The case could have been avoided by a proper check of the quarry which should therefore show the real results of it. Therefore the sale would not have been made and there would not have been a problem between the two parties. Another person involved in the contract breach is the expert sent by Aragorn ,as it is proved that the quarry does not answer to the advertisement and therefore the ?expert? is not a knowledgeable and trustworthy person, this means that the contract would be void as the opinion that the quarry covers the advertised conditions is not from a reliable source. ________________ Velko Vatahov Unit 21 ? Aspects of Contract & Business Law Page ...read more.