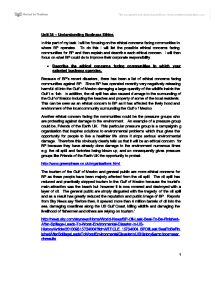 http://news.sky.com/skynews/Home/World-News/US-State-Of-Alabama-Sues-BP-And-Transocean-Over-Gulf-Of-Mexico-Oil-Leak/Article/201008215683244?lpos=World_News_Article_Related_Content_Region_3&lid=ARTICLE_15683244_US_State_Of_Alabama_Sues_BP_And_Transocean_Over_Gulf_Of_Mexico_Oil_Leak * What measures could be taken to improve corporate responsibility? Corporate responsibility is simply when a firm achieves success by taking and considering into account all the ethical values and environmental factors which may arise for them, in this case BP. Corporate responsibility involves minimising the chance of negative activities i.e. the oil spill and maximising positive actions. There are plenty of measures that could be taken by BP to help improve the corporate responsibility of their business. Since there has been more than one disaster caused by BP there are numerous measures BP should consider taking to improve their corporate responsibility. One measure that could be taken to improve BP's corporate responsibility could be to undertake test runs and plan ahead for large business operations like the transportation of oil. If BP is able to take this measure then it will prevent the accidental disasters such as oil spill because BP will have planned and practiced time and time again to deal and thus prevent the possible situations that could encounter. Of course this measure does not mean that there will be no chance of a disaster but it will definitely greatly reduce the chance of a disaster because BP will plan and practice the large operations which mean that they would be more ready for the actual real operation. ...read more.

Obviously this is another crucial measure which could affect BP very positively however it will have some risks, it will cost more and more workers may be needed on the other hand if businesses like BP wish to recover from disasters likes the recent oil spill or simply want to be successful they must take risks even though this is not a major risk it will benefit BP vitally in the long term. One more measure BP could take to enhance their corporate responsibility could be to be more aware of adverse weather conditions that may occur during the transportation of oil or simply transactions/transportations. Even though it wasn't the weather conditions that cause the oil spill but was a methane bubble which reacted with the chemicals, the weather conditions may play a bit role when undertaking operations over the waters. It's important that BP plan up ahead before transactions over the waters, even though they haven't had crucial disasters due to the weathers they may be thinking that it isn't a big deal and thus not pay much attention anymore to the weather but it is very important for BP to not forget the possible encounters that may arise. ?? ?? ?? ?? 1 ...read more.