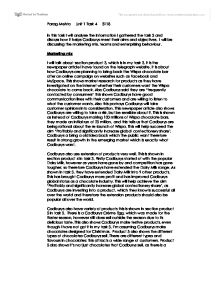 In this task I will analyse the information I gathered the task 3 and discuss how it helps Cadburys meet their aims and objectives. I will be discussing the marketing mix, teams and enterprising behaviour. Marketing mix I will talk about section product 3, which is in my task 3. It is the newspaper article I have found on the telegraph website. It is about how Cadburys are planning to bring back the Wispa chocolate bar after an online campaign on websites such as Facebook and MySpace. This shows market research for products as they have investigated on the Internet whether their customers want the Wispa chocolate to come back. Also Cadburys said they are "frequently contacted by consumers" this shows Cadburys have good communication lines with their customers and are willing to listen to what the customer wants. Also this portrays Cadburys will take customer opinions into consideration. This newspaper article also shows Cadburys are willing to take a risk, but be sensible about it. This is shown as instead of Cadburys making 100 millions of Wispa chocolate bars, they made an initial run of 23 million, and this tells us that Cadburys are being rational about the re-launch of Wispa. ...read more.

This shows that Cadburys have used their initiative by placing their advert in a time zone where millions of viewers would be watching television. These will help achieve the aim 'Profitably and significantly increase global confectionery share' because they want to invest, innovate and execute. By investing into products Cadburys can find new ways to promote their products. This can be done globally and therefore increase Cadburys chances have selling abroad and consequently gaining more global confectionery share. I will now talk about section place 1 in task 3; it shows Cadburys products on the popular Internet website Ebay. This shows that Cadburys products aren't just sold in shops, they are sold in a variety of places just like the Internet. This shows the popularity of Cadburys as their products are being sold all over. Section Place 2 in task 3 is about Cadburys in India. It states that Cadburys India ranks 8th in Cadbury Schweppes, behind the UK, Australia, Canada and Ireland, as it states this, we know Cadburys also sell in the countries listed. This shows me that Cadburys are a producer; therefore the method of distribution is very important as it affects how their products are received and how it sells. ...read more.

Also in the CD I have put in my task 3, there is the eye brow advert, this shows Cadburys have used enterprise behaviour as they suspected this bizarre advert would be a massive hit, and Cadburys were absolutely right. The creation of the gorilla advert was excellent enterprising behaviour, as it was a massive risk, as the advert would have been a massive success or a huge failure. Cadburys realised this was the case, but had enough confidence in themselves to go along with this idea. This advert was a major success, and shows intelligent enterprising behaviour. This helps to achieve the aim 'Profitably and significantly increase global confectionery share', as this advert is shown all over the world, and was a success. Consequently, the income from all around the world increased. Conclusion This is a short analysis of the evidence I have gathered in my task 3. Cadburys use the marketing mix, Place, Price, Promotion and Product to achieve their aims and objectives. Along with this they have to work well as teams and have to conduct good enterprising behaviour. The factors I have talked about above is just a small number of examples, they have done many more and are continuing to do so. ?? ?? ?? ?? Parag Mehta Unit 1 Task 4 3118 ...read more.