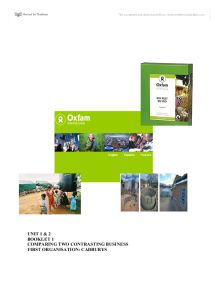 1 Introduction 2 Oxfam's history 2 Oxfam's Legal status 3 Oxfam's Suitability to being a registered charity 4 Oxfam's stakeholders/ how the influence them 5 Reason Cadburys are in business 6 Cadburys Aim and Objectives 7 Evaluations Introduction For this next part in comparing two contrasting business I have chosen to write about Oxfam which is a world known registered charity. I will be finding looking at all the aspects that influences Oxfam. Oxfam History According to Oxfam's website throughout the Second World War, Greece was occupied by the Nazis. In 1941, the Allies imposed a naval blockade, and barely any food or medical supplies could get through, even to civilians. Famine rapidly took grip the Greek nation. Due to this in May 1942 a nations Famine Relief Committee was set up, as well as support groups were formed throughout the UK. Their core purpose was to persuade the British government to allow essential supplies through the blockade. In the series of the national relief effort, a number of people came together to form the Oxford Committee for Famine Relief. In the midst of its founding members were Regius Professor of Greek at Oxford, Canon T R Milford of the University Church and Professor Gilbert Murray, a member of the national Committee and former. Also with theirs members was the commitment of a London business man named Cecil Jackson-Cole who was appointed Honorary Secretary in December 1942. As time progressed committee saw a continuing need and enlarged its objectives to include 'the relief of suffering in consequence of the war'. With the committee's enlargement of their objectives enabled them to centre their activities on the prevention on food parcels and clothing to Europe as they were granted funds in 1948 for projects in Europe and elsewhere. The Committee progressively became known by its abbreviated telegraph address, as Oxfam. This name was formally adopted in 1965. ...read more.

This Oxfam have made a considerable amount of effort in achieving this aim have made as all the regions in which they operate in have made a progress in implementing and strengthening their preparedness plans in case of any disasters. Example with Oxfam's case study of Kitgum which is a town in the northern districts of Uganda, Oxfam has establish a ways of providing humanitarian assistance over about 120,000 people, despite the high level of insecurity in the country's 18-year conflict. In the heart Oxfam have provided night shelters, water and sanitation facilities, and hygiene education for people coming into town at night. Fourthly with Oxfam's aim for every one to have the right to be heard seems to be making study progress consent to achieving this aims upon reflection of their annual report for 2004-2005. In this report Oxfam appear to be working to achieve this aim as with their case study of Zambia where their staff helped work helped achieve a change of stance by the governments. And lastly with Oxfam's aim for every one to have the right to equality. Under this Oxfam aimed to make progress towards more and higher quality integration of gender issues into all aspects of their work - i.e. recognising/seeking to change the balance of power between men and women in all their programmes which include development, humanitarian and campaigning. This aim appear to bee heading in the right direction as with their case study of Oxfam's work in India which shows a program which have been set up to women against violence On the over all concept of whether Oxfam has successful in achieving their aim, I will in my opinion say "yes". This is because from looking at their annual report for 2004-2005 it gives a clear description of how their objectives have worked according to plans in achieving their aims. Also from fig 1.1, 1.2, and 1.3 shows the different sources of finance they use to raise money and how the money raised are divided to meeting their aims and objectives. ...read more.