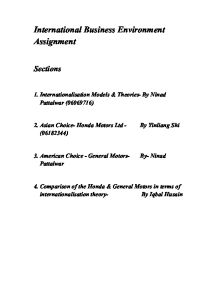 Comparison of the Honda &amp; General Motors in terms of internationalisation theory

International Business Environment Assignment Sections 1. Internationalisation Models & Theories- By Ninad Pattalwar (06069716) 2. Asian Choice- Honda Motors Ltd - By Yinliang Shi (06182344) 3. American Choice - General Motors- By- Ninad Pattalwar 4. Comparison of the Honda & General Motors in terms of internationalisation theory- By Iqbal Husain Internationalisation Models & Theories By Ninad Pattalwar To explain the internationalisation of a firm there are mainly three traditional theories which are behavioural theories which include the Uppsala model, Network approach, the Eclectic Paradigm and other theories that are borrowed from the main perspective of economics. However there is extensive literature suggests that firms internationalise mainly due to external and internal triggers. internal triggers for internationalisation of firms consists of factors such as management's interest in internationalisation, foreign queries about the organisation's products and saturated home market (Hollensen, 2004). On the other hand the external triggers for a firm to globalise include drivers such as country, cost, customer and competitive influences. * The Dunning eclectic theory is also known as OLI Model. Let's assume if the firm possesses net ownership advantage vis-�-vis firm of other nationalities in serving particular markets. These ownership advantages largely take the form of the possession of the intangible asset, that is, at least for period of time, exclusive or specific to the firm possessing them. Assuming condition that ownership is satisfied, it must be more beneficial to the enterprise possessing these advantages to use them itself rather than to sell or lease them to foreign firms, that is, for it to internalise its advantage through an extension of its own activities rather than externalise them through licensing and similar contract with independent firms. Assuming conditions that ownership is gained and operations are expanded in foreign markets it must be profitable for the enterprise to utilize these advantages in conjunction with at least some factors input outside its home country. ...read more.

Cutting expenses will be the main policy as regards production. Hence GM have followed the network model to some degree as their joint venture come in terms of relations with Fiat, by collaborating they have reduce cost and innovated new production techniques. Which gave both of them some degree of competitiveness as they have gained purchasing power as well as reduced cost in terms of purchasing from the supplier. Asian Choice- Honda Motors Ltd -By Yinliang Shi The reason for choosing Honda as an example of Asian multi-national enterprise for this report is that Honda is heavily, successfully and still increasingly involved in the global markets since it began its international operation in 1960s. Honda was not born globally; as a relatively late entrant into Japanese automobile industry in 1950s it was later pushed to enter foreign market by intense domestic competition (arguably that there was no first-mover advantages could be gain in Japanese motor industry at that time), it realized under such intense competition it was too hard to increase the market share therefore it was impossible to benefit from large production and thus the economies of scale. However such intense domestic competition had positive effect on Honda too, that is while it was trying to survive by competing with world class rivalries (such as Toyota) in the home market, it was pushed to innovating its products and improve production techniques, learning and responding the rivalries' strategies by monitoring them and was benefited from the level of sophistication of the market, such as supply of skilled labors and suppliers, all of these benefits gained enabled Honda's products being competitive in foreign markets later, and also the experience curve theory suggests all of these factors could increase the efficiency of business too, therefore lower production costs were achieved rather by the economies of scale at that time. In contrast with the strategies that have been made by Honda in its internationalization process, these theories and models below will be looked at: -Uppsala internationalization model -Heckscher-Ohlin' s theory of factor endowment -The Linder theory of overlapping demand -Raymond Vernon's international product life cycle (IPLC) ...read more.