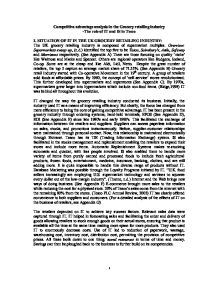 Competitive advantage analysis in the Grocery retailing industry -The role of IT and IS in Tesco I. SITUATION OF IT IN THE UK GROCERY RETAILING INDUSTRY: The UK grocery retailing industry is composed of supermarket multiples. Overview: Supermarkets sweep up, (n.d.) identified the top five to be Tesco, Sainsbury's, Asda, Safeway and Morrisons respectively. (See Appendix A) There are those focusing on quality 'niche' like Waitrose and Marks and Spencer. Others are regional operators like Budgens, Iceland, Co-op. Some are at the cheap end like Aldi, Lidl, Netto. Despite the great number of retailers, the top 5 capture an average market share of 71.55%. (See Appendix B) Grocery retail industry started with Co-operative Movement in the 19th century. A group of retailers sold foods at affordable prices. By 1960, the concept of 'self-service' stores revolutionized. This further developed into supermarkets and superstores (See Appendix C). By 1970s, supermarkets grew larger into hypermarkets which include non-food items. (Ridge,1998) IT was behind all throughout this evolution. IT changed the way the grocery retailing industry conducted its business. Initially, the industry used IT as a means of improving efficiency. But slowly, the focus has changed from mere efficiency to being the core of gaining competitive advantage. IT has been present in the grocery industry through ordering systems, hand-held terminals, EPOS (See Appendix D), EDI (See Appendix E) since late 1980's and early 1990's. This facilitated the exchange of information between the retailers and suppliers. Suppliers can access paperless information on sales, stocks, and promotions instantaneously. Before, supplier-customer relationships were maintained through personal contact. Now, this relationship is maintained electronically through Extranet. Tesco has its TIE (Trading Information Exchange) system. IS also facilitated in the stocks management and replenishment enabling the retailers to expand their stores and include more items. Automatic Replenishment Systems makes re-stocking automatic and quicker, with less people involved. IS also enabled them to handle more variety of items from purely canned and processed foods to include fresh agricultural products, frozen foods, entertainment, medicine, insurance, banking, clothes, and are still adding more. ...read more.

APPENDIX E EDI's DEPENDENCE ON TECHNOLOGY When a buyer firm wants to send an electronic purchase order to a supplier, it must first transform data from internal computer applications used for managing inventory or production into the common language of EDI. Similarly, the supplier firm must convert the received order into data formats that its shipping and order entry applications can process. To send EDI transactions between two trading partners, a special type of software called a translator or "EDI management software" is needed to convert the data into ANSI syntax. Similarly, data received from trading partners in ANSI formats must be converted to a format that an internal business computer application can process. EDI message then travels electronically to the trading partner in order to be received. Traditionally, EDI transmissions flow through closed networks called value added networks or (VANs). As communications alternatives have developed in the late 1990s for the use of TCP/IP (Internet) protocol and file transfer formats for Internet and direct transmission to company and proprietary networks, EDI is being increasingly transferred over non-VAN networks and Internet VANs as well. EDI has the potential to affect financial and information flows across the entire cash flow time line. Benefits a company may get include: reduced transaction and banking costs (in financial EDI applications); Reduced delays and errors; and Stronger relationships with trading partners. There are at least eight major areas of benefit for firms and organizations that implement EDI: Reduced Cycle Time, Reduced Error Rate, Labor Savings, Reduced Storage Costs, Reduced Uncertainty, Enhanced Security, Transaction Cost Savings, Trading Partner Relationships APPENDIX F DEVELOPMENTS BROUGHT BY WEB AND INTERNET Ridge (1998) identified the developments the retailers were able to introduce because of IS and IT. Sainsbury ('Order and Collect') was the first to sell through the web in February 1995. This was however limited to a number of products: wine, flowers and chocolates. ...read more.

This is differentiation of Tesco's services from the rest. It will not be demanding for Tesco since their bargaining power as buyer is high and thus can make such requests from suppliers easily. Picture of Auto ID Consumer Auto ID. Retrieved April 12, 2004 from the Azalea software, inc. website: http://www.azalea.com/ConsumerBarcodes/ APPENDIX S SMART CARDS Smart cards are smarter versions of credit and debit cards. Smart cards contain personal information about the owner, including a pin number. Such that a pin number must be entered for every transaction the card is used. This minimizes fraud. This again is an added service to the customers ensuring them of a more secure payment for their transactions. APPENDIX T EXPIRY ALARM SYSTEM An Expiry Alarm System is aimed to inform the retailer of any near-to-expiry products. This system may record the expiry dates of the goods. When the time nears, the alarm system will send a warning so that something may be done to dispatch of the goods. Such products may be discounted. This way, no products are wasted, while at the same time increasing sales. APPENDIX U INTERACTIVE KIOSK SYSTEM The Interactive Kiosk System will allow for interactive query on products by customers. The exact location, with the shelf number can be shown, together with the number of stocks remaining on the shelf. This system can also handle requests for unavailable goods. Currently, a customer can request that an unavailable good be purchased by requesting it in the customer service counter. With they system, this request can be done on-line. The system will post a questionnaire to the customers as to how many stocks of a certain good he wants to purchase. If there is no stock left, the system will query the customers if he wants stocks to be ordered stating the minimum requirements. This way, interference of staff is minimized, saving on staff cost and having the staff do more important functions. The information gathered by the kiosk will be a basis for sales information, hinting on the number of goods to be supplied in the future. ...read more.