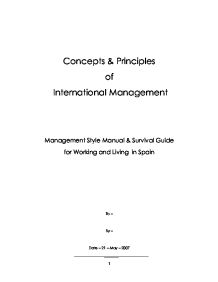 Concepts & Principles of International Management Management Style Manual & Survival Guide for Working and Living in Spain To - By - Date - 21 - May - 2007 Introduction Situated in south-western Europe, Spain's geographical diversity embraces landscapes that range from deserts and coastal beaches to snow-covered mountains. Spain's diverse and unique regions are not only geographically and climatically different, but form a multifaceted compound of personalities and identities. Spain has a population of approximately 41 million. With Madrid being the capital, Spain consists of 17 autonomous communities and Castilian Spanish is the official language. It is the first language of over 72% of the population. English is less widely spoken than in other major European countries and it is gauged that around one in four Spaniards have a good command of English. With the democratic transition after 1975, the joining the European Community in 1986 and the participation in the European Economic and Monetary Union Spain has established a base for a long-term economic boost. Its economy is the eighth biggest worldwide and the fifth largest in Europe. Spanish economy has experienced good economic growth and proved itself to be one of the best exercising economies in the European Union. Growth arose from good economic management, lower taxes, employment growth and low interest rates. The country's economy has created more than half of all the new jobs in the EU over the five years ending 2005. During the last four decades the Spanish tourism industry has grown to become the second biggest in the world. Furthermore companies are among the largest investors in South America. In Spain the family is the fundament of the social structure and includes both the core and the extended family, which sometimes provides both a social and a financial support network. However, familial networks have become less tight. The structure and the size of the family diversify, but in the main people have less children than before, and fewer people live in their homes with extended family. ...read more.

Where different sectors are concerned, the report unveils how directors in the financial sector tend to use leadership styles that are more direct, transactional and less oriented to learning. While companies in the technology sector give more importance to coaching and vision. MONOCHRONIC vs. POLYCHRONIC Spaniards can be classed as polychronic where nothing seems solid or firm, and there are always changes right up to the very last minute or even in plans for the future. Polychronic cultures are unconventional and flexible with time because it is not seen as a resource or as opportunity cost. Usually start times are flexible and schedules are unrushed. For example, it is not considered to be impolite to keep people waiting, as long as it does not exceed 30 minutes. Since time is also non-linear Spanish tend to manage several tasks at once, often in an unplanned sequence (e.g. salespeople in stores talk to several people at once rather than give only one customer their attention and taking people in turn; a meeting can be interrupted by a phone call; etc.). Another significant cultural difference is the smaller radius of personal space in Spain. Spaniards are most likely not to appologise when bumping into each other or pushing their way through crowds, which can be a shock to visitors from foreign countries. In the business environment, when it comes to forecasting, plans are often based on assumptions, intuition and experience because every day is regarded as unpredictable. Spaniards in the business environment usually make decisions based on judgement, experience and political realities. The supervisory style allows for the rules to be circumvented, whereas style and creativity are highly valued. Titles describe a person's status, which people take pride in, causing great motivation for competition in organisations. Additionally, personal feelings affect the performance. Spanish managers feel that the employees must be watched, thus giving them the total control where also mistakes can be blamed on other people. ...read more.

Tipping everybody is very common in Spanish culture; a tip of 5% in restaurants will be appreciated. DRESS ETIQUETTE Appearance is extremely important to Spaniards. They place greater value on formal dressing than many other Europeans. In Spain it is necessary to project good taste in apparel. If you want to leave a lasting impression, look fashionable and smart; dress conservatively and try to avoid bright or flashy colours, for it is not favoured to stand out. Business attire includes suits and ties, even in warm weather, as shorts are rarely worn in public. However, the jacket can be taken off during a meeting, if the senior person may do so. Female business travellers are best off in well-cut suits, dresses, blouses and skirts, and they should accentuate their femininity through impeccable hair. Elegant accessories are significant for both male and female. If you get a formal invitation to a party, you should wear a black tuxedo for men and a cocktail dress for women, always in conservative colours. Business casual usually means a clean and fashionable designer cotton shirt and good pants, and of course, no tie. WORKING HOURS and HOLIDAY The opening hours of shops or businesses are regulated by the government. However, working hours can vary across Spain. Traditional working hours in Spain are Saturday morning and Monday to Friday from 9:00-9:30 until 13:30-14:00. After a few hours for lunch and a siesta, people return to work from 16:30-17:00 until 19:30-20:00. However, Spanish working hours have become more "Europeanised" in recent years, particularly in the northern cities, where people tend to finish earlier and shorten their lunch break. In the summer months, when most people take their vacations, many organisations set an abbreviated work schedule called horario intensive, whereas employees work from 8 am till 3 pm. During vacation time (usually taken in August), by law, the employees under contract are entitled to a whole month of vacation each year. Additionally, when a holiday falls on a Tuesday or a Thursday, it is common in the office to take the preceding Monday or following Friday off. ...read more.