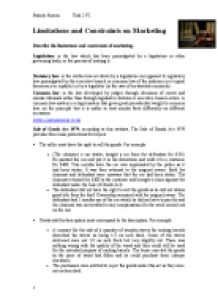 Describe the limitations and constraints of marketing

ï»¿Bukola Akanni Task 2 P2 Limitations and Constraints on Marketing Describe the limitations and constraints of marketing. Legislation: is the law which has been promulgated by a legislature or other governing body, or the process of making it. Statutory law: is the written law set down by a legislature (as opposed to regulatory law promulgated by the executive branch or common law of the judiciary in a typical democracy or republic) or by a legislator (in the case of an absolute monarchy. Common law: is the law developed by judges through decisions of courts and similar tribunals rather than through legislative statutes or executive branch action. A common law system is a legal system that gives great precedential weight to common law, on the principle that it is unfair to treat similar facts differently on different occasions. www.e-lawresources.co.uk Sale of Goods Act 1979: according to this website, The Sale of Goods Act 1979 provides four main protections for buyers: 1. The seller must have the right to sell the goods. For example: 1. (The claimant, a car dealer, bought a car from the defendant for £334. He painted the car and put it in his showroom and sold it to a customer for £400. ...read more.

These protections are in the form of statutory implied terms. This means that the Sale of Goods Act will put these terms into all contracts for the sale of goods no matter what the parties themselves have agreed in the terms and conditions of sale. A contract is for the sale of goods provided it is a contract to transfer ownership of goods (as opposed to a hire agreement) and the goods are exchanged for money. This excludes contracts of barter unless money is also given. www.wikipedia.co.uk Trade Descriptions Act 1968: according to this website it shows that this is an Act of the Parliament of the United Kingdom which prevents manufacturers, retailers or service industry providers from misleading consumers as to what they are spending their money on. This law empowers the judiciary to punish companies or individuals who make false claims about the products or services that they sell. Applying a false trade description to goods is a strict liability offence: provided it is shown that the description was applied and was false, the accused has to prove certain defences in order to escape conviction. Each product sold must be as described, of satisfactory quality, and fit for purpose. "As described" refers to any advert or verbal description made by the trader. ...read more.

Pressure Groups and Consumerism Pressure groups are organisations formed with the objective of influencing government, business companies or business policy at local, national or international level. Pressure groups can be extremely effective in changing organisational behaviour. Formed by people with a common interest who join together in order to further that interest e.g. Greenpeace, Drink aware, Amnesty International Consumerism defined as ?social movement seeking to augment the rights of buyers in relation to sellers? this mean that it a role customers play in which to helping the society businesses to be more suitable with the product they sell. For example: 1. Watchdog: this is a consumer protection organisation that helps protect consumer?s right. 2. Rogue Traders: this is a prime-time presenter-led investigative consumer affair. 3. Consumer Association www.which.co.uk: this is organisations that known for testing household products like washing machines and digital cameras. They do not only test thing but according to their website it shows that their mission statement is to ?Exist to make individuals as powerful as the organisations they have to deal with in their daily lives. 4. Office of Fair Trading: this is a government organisation that, their mission is to make sure that markets work well for consumers. They achieve this by promoting and protecting consumer interests throughout the UK, while ensuring that businesses are fair and competitive. Watchdog, Rogue Traders and Consumer Association: These organisations help businesses to make sure they carry out good product. ...read more.