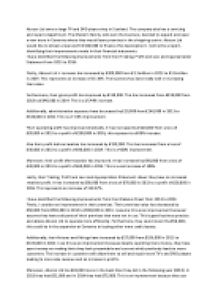 Describe the performance of a selected business by its trading, prot and loss, appropriation accounts and balance sheet.

Transfer-Encoding: chunked ï»¿Abscon Ltd owns a large TV and DVD player shop in Scotland. The company also has a servicing and repairs department. The Malcorn family, who own the business, decided to expand and open a new store in Coventry where they would lease premises in the shopping centre. Abscon Ltd would like to obtain a loan worth £100,000 to finance this development. I will write a report, identifying their improvements made in their financial statements. I have identified the following improvements from their Trading, Profit and Loss and Appropriation Statement from 2013 to 2014: Firstly, Abscon Ltd.’s turnover has increased by £200,000 from £1.3million in 2013 to £1.5million in 2014. This represents an increase of 15.38%. The business has done really well in increasing their sales. ...read more.

Lastly, their profit and loss account shows an improvement of £20,000 from £43,000 in 2013 to £63,000 in 2014. This is an improvement as it clearly shows that they have made an increase, this means the extra cash could go towards the expansion or buying more fixtures and fittings to encourage more customers to shop there. By identifying all improvements made by Abscon Ltd I have come to the conclusion that the bank manager would approve a loan of £100,000. This is because they have made a clear improvement from 2013 to 2014. For example, a £200,000 increase in turnover and £90,000 increase in their retained profit. Because they have made more profit the following year Abscon Ltd are more likely to be able to pay back the loan; which is why they should obtain this financial help to expand their shop in Coventry. ...read more.