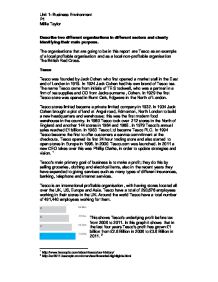 Describe two different organisations in different sectors and clearly identifying their main purpose. The organisations that are going to be in this report are Tesco as an example of a local profitable organisation and as a local non-profitable organisation The British Red Cross. Tesco Tesco was founded by Jack Cohen who first opened a market stall in the East end of London in 1919. In 1924 Jack Cohen had his own brand of Tesco tea. The name Tesco came from initials of TE Stockwell, who was a partner in a firm of tea supplies and CO from Jacks surname, Cohen. In 1929 the first Tesco store was opened in Burnt Oak, Edgware in the North of London. Tesco stores limited became a private limited company in 1932. In 1934 Jack Cohen brought a plot of land at Angel road, Edmonton, North London to build a new headquarters and warehouse; this was the first modern food warehouse in the country. In 1960 Tesco took over 212 stores in the North of England and another 144 stores in 1964 and 1965. ...read more.

Tesco's liabilities do not lie with directly one person as there are so many shareholders, but if the company goes bust they will bring in an administrator who will evenly distribute the debts between all the share holders. British Red Cross The British Red Cross are a charitable organisation, this mean that the organisation does not issue stock shares or distribute its surplus funds to owners or shareholders, but instead uses the funds to help achieve its own goals.4 They are a volunteer-led humanitarian organisation that helps people in crisis, whoever and wherever they are.5 They have been running since 1870 and help people all over the world in poverty and crisis areas. They have helped in the first and second world war and also in areas that have been struck by natural disasters, such as flooding and earthquake zones. They go in to these areas and try and help people who are worst affected and help in medical care, shelter and providing food and water. The British Red Cross are a national organisation which have charity shops all over the UK. ...read more.

humanitarian issues, such as food insecurity and the rules of war * Responded to 2,000 fires, accidents, water shortages and other emergencies across the UK * Supported 439,600 people in the UK with health and social care services * Helped 39,900 refugees and asylum seekers adapt to life in the UK * Provided first aid cover at 9,500 public events * Raised �17.5 million for the Haiti earthquake * Raised �12 million for the Pakistan floods * Responded to 25 overseas disasters * Trained 335,500 people in first aid. 8 As charities are government funded by a large amount, and as charities raise there money they would never go into debt as they do not borrow money off of lenders, they also do not have any participation in the stock market. They may shut down for other reasons but because people donate money and the government give them money they never owe anyone anything so there would be no liability on the charity. 1 http://www.tescoplc.com/about-tesco/our-history/ 2 http://ar2011.tescoplc.com/overview/financial-highlights.html 3 http://www.investopedia.com/terms/p/plc.asp#axzz1Z8o6gkfy 4 http://en.wikipedia.org/wiki/Nonprofit_organization 5 http://www.redcross.org.uk/About-us 6 http://www.redcross.org.uk/About-us/Our-advocacy-work 7 http://www.answers.com/topic/british-red-cross 8 http://www.redcross.org.uk/About-us/The-year-in-pictures ?? ?? ?? ?? Unit 1- Business Environment P1 Millie Taylor ...read more.