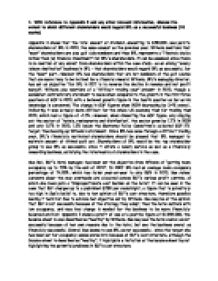 4. With reference to Appendix 3 and any other relevant information, discuss the extent to which different stakeholders would regard BPL as a successful business (18 marks) Appendix 3 shows that the total amount of dividend, amounting to �50,000, was paid to shareholders of BPL in 2010, the same amount as the previous year. Wilhelm mentions that "most" shareholders are also golf club members and thus BPL represents a "lifestyle choice rather than [a] financial investment" for BPL's shareholders. It can be assumed, since there is no mention of any unrest from shareholders within the case study - as an aiming "luxury leisure destination" business in BPL - that shareholders would regard BPL as successful, for the "most" part. However BPL has shareholders that are not members of the golf course that are more likely to be inclined for a financial reward. ...read more.

Shareholders of BPL would be the top stakeholder group to see BPL as successful, since it offers a luxury service as well as a financially rewarding business, satisfying the listed wants of stakeholders in the case. Sue Bell, BLP's Hotel manager, has been set the objective from Wilhelm of "getting room occupancy up to 75% by the end of 2013". In 2007 BPL had an average room occupancy percentage of 74.25%, which has fallen year-on-year to only 56% in 2010. Sue raises concerns about the way overheads are allocated across BLP's various profit centres, of which she feels puts a "disproportionate cost burden on the hotel". It can be seen in the case that BLP charges up to a published �780 per room/night, a figure that is potentially too high in Sue's belief to, due to her opinion of BLP's cost structure, therefore possibly making it hard for Sue to achieve her objective set by Wilhelm. ...read more.

Although the balance sheet shouldn't be studied in isolation, it's is just a snapshot at the date at which it is recorded, since the figures often fluctuate and it is limited in the fact that it doesn't show opinions of BPL's stakeholders. Taking other factors into account, shareholders should be happy as they gain financially as well as personally. Although it should be highlighted that this opinion is based around Wilhelms perceptions of shareholders, it may actually be shareholders are more interested in a financial investment than he makes out. Sue Bell may not see BPL as successful because of her own issues, which are not reflected in the balance sheet, although these issues were in the past, not the present. It's not fully conclusive to give an exact extent on how different stakeholders would regard BPL as successful as the data in the case is outdated and possibly untrue. Only by gaining the opinion of different stakeholders can it be seen whether stakeholders see BPL as successful, and even then stakeholders may hold different interpretations on what "successful" is. ...read more.