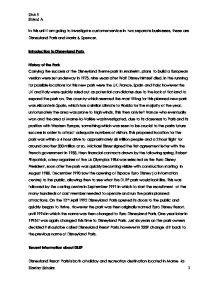 Disneyland and M&amp;S. I am going to investigate customer service in two separate businesses, these are Disneyland Paris and Marks &amp; Spencer.

In this unit I am going to investigate customer service in two separate businesses, these are Disneyland Paris and Marks & Spencer. Introduction to Disneyland Paris History of the Park Carrying the success of the Disneyland theme park in Anaheim, plans to build a European version were set underway in 1975, nine years after Walt Disney himself died. In the running for possible locations for this new park were the UK, France, Spain and Italy; however the UK and Italy were quickly ruled out as potential candidates due to the lack of flat land to expand the park on. The country which seemed the most fitting for this planned new park was Alicante in Spain, which has a similar climate to Florida for the majority of the year, unfortunately the area was prone to high winds. This then only left France who eventually won and the area of Marne-la-Vall�e was investigated, due to its closeness to Paris and its position with Western Europe, something which was seen to be crucial to the parks future success in order to attract adequate numbers of visitors. This proposed location for the park was within a 4 hour drive to approximately 68 million people and a 2 hour flight for around another 300 million or so. Michael Eisner signed the first agreement letter with the French government in 1985, then financial contracts drawn by the following spring. Robert Fitzpatrick, a key organiser of the LA Olympics 1984 was selected as the Euro Disney President, soon after the park was quickly becoming visible with construction starting in August 1988. December 1990 saw the opening of Espace Euro Disney ( a information centre) to the public, allowing then to see what the DLRP park would look like. This was followed by the casting centre in September 1991 in which to start the recruitment of the many hundreds of cast member needed to operate and run the parks planned attractions. ...read more.

They also would expect that the items in which they purchase can be delivered as they may purchase larger items which would include furniture for a new bar for example. Factors which affect both internal and external customers needs There are a number of different factors in which affect customers needs both internally and externally. I have researched into these different needs for both Disneyland and Marks and Spencer. Disneyland I have identified family status as my first factor in which affects customers both internally and externally. This need would affect Disneyland's internal customers as with families, they may require flexi-time which would enable them to attend to their families when needed and make up the time when they are not needed. This would be important as if they couldn't attend to their families they may choose to work somewhere in which they can be granted flexi-time. They may also need transport to and from Disneyland if they live close, but not in walking distance of the Resort. This first need would affect Disneyland's external customers as they would expect there be different packages for them, depending on income or the age of the family's children. In order to suit this need, the customers would expect Disney provide various deals, including; special offers, discounts or family tickets. I have researched into some of these different packages in which Disney provide, these include: Save up to 30% off your hotel, park tickets and now even transport with selected partners For arrivals from 9th January 2011 to 7th November 2011 on a minimum stay of 2 night/3 days this package includes: * Accommodation * Tickets to both Disney Parks each day * Breakfast in your selected hotel * AND 30% off transport with either Eurostar, Flybe or P&O Ferries This package is most likely to benefit people of the lowest income who want to visit the Disneyland resort, as it offers a large discount off the total cost of the visit as long as they visit between the selected times which are usually off peak. ...read more.