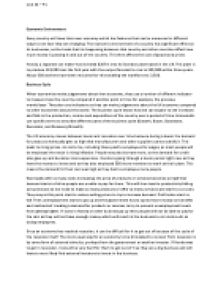 easuring The State Of The UK Economy And Its Effects On Honda.

ï»¿Unit 38 – P1 Economic Environment Every country will have their own economy which has features that can be measured in different ways to see how they are changing. The economic environment of a country has significant effect on its businesses, as the trade that his happening between that country and other countries affect how much money is passing in and out of the country. This then affects the cost of goods and prices. Honda, a Japanese car maker has invested £267m into its Swindon plant based in the UK. The plant is to produce 183,000 cars the first year with the output forecast to rise to 250,000 within three years. About 500 workers have been recruited for this totalling the workforce to 3,500. Business Cycle When economists make judgements about then economy, they use a number of different indicator to measure how the country compared it another point in time for example, the previous month/year. They also use indicators so they can make judgements about the UK economy compared to other economies around the world. The business cycle shows how we can expect to see increases and falls in the production, income and expenditure of the country over a period of time. Economists use specific terms to describe different parts of the business cycle (Growth, Boom, Slowdown, Recession, and Recovery/Growth). The UK economy moves between boom and recession over time because during a boom the demand for products eventually gets so high that manufacturers and other suppliers cannot satisfy it. ...read more.

GDP has been put in place to find out what is going to happen to a business such as Honda in the future, this can be predicted by using things like output measures, income measures and expenditure measures so they can work out what is going on in the economy. Using this information Honda could also make plans for the future such as reducing/increasing production. Rates of Inflation and Deflation Inflation and deflation relate to the measurement of prices in the UK economy. Inflation is measured by the consumer price index (CPI), which looks at prices in the economy as a whole using standard measurements that have been agreed across Europe. The retail price index (RPI) was traditionally used to measure inflation before the charge over to the CPI and includes mortgage interest payments, unlike the CPI. The CPI index measures the average price changes of a ?basket of goods? over a period of time. The price of the basket of goods is measured each month and the Office for National Statistics uses the new prices to work out how much the goods have changed in price. Inflation is when the prices have gone up and deflation is when the prices have gone down. When inflation is going up it will affect Honda and their prices will go up. This will lead to consumers not being able to buy them which will lead to the business start cutting costs. This will eventually lead to unemployment which will make employees ask for a raise in pay. ...read more.

Like a trade deficit, a negative balance of payments indicates that more money is flowing out of the country than is flowing into the country. Honda has received 267m from Japan to build a plant in the UK, Swindon. The 267m would be used for costs related to the business such as Insurance, Construction, Communications and Transportation. Structural Adjustments When people look at the economy as a whole, they often refer to its structure. This means the overall make-up of the economy. The structure is divided into three sectors: * Primary Sector, which consists of activities that directly relate to nature resources, including farming, mining, oil extraction and fishing * Secondary Sector, which consists of activities that include manufacturing and construction. * Tertiary Sector, which consists of activities that relate to services, such as banking, education, communication, hotels, catering and transport. The new Honda plant would in the Secondary Sector as they manufacture the cars for the dealerships that will be selling them. Welfare considerations During economically challenging times Honda needs to cut costs and offer more services or product more goods in order to be competitive. This means that the economic environment affects the way that businesses operate. Employees who are working make tax and national insurance payments from their earnings and these are used to fund public services, such as hospitals and schools. Honda also makes contributions on behalf of their employees, which include payments towards a pension scheme. The money taken from Honda Employees not only goes towards paying for public services, but also funds benefits for those people who are unemployed, unable to work or retired. ...read more.