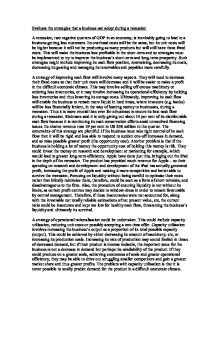 Evaluate the strategies that a business can adopt during a recession

Evaluate the strategies that a business can adopt during a recession A recession, two negative quarters of GDP in an economy, is inevitably going to lead to a business getting less customers. Its overhead costs will be the same, but its unit costs will be higher because it will not be producing as many products but will still have these fixed costs. This will make the business less profitable in the short-term and so strategies must be implemented to try to improve the business's short-term and long-term prosperity. Such strategies might include improving its cash flow position, downsizing, decreasing its costs, decreasing its gearing and managing its receivables and payables more carefully. A strategy of improving cash flow will involve many aspects. They will need to decrease their fixed costs so that their unit costs will decrease and it will be easier to make a profit in the difficult economic climate. This may involve selling off excess machinery or ordering less inventories, or it may involve increasing its operational efficiency by holding less inventories and thus lowering its storage costs. Ultimately, improving its cash flow will enable the business to remain more liquid in hard times, where investors (e.g. banks) will be less financially lenient, in the way of loaning money to businesses, during a recession. Thus it is more crucial than ever for a business to ensure its best cash flow during a recession. ...read more.

It may do this in a number of different ways, e.g. reducing its machinery levels, cutting employees' jobs or using cheaper materials to make its products. An Intellect report (State of the UK Technology Sector - President's Report 2009) demonstrated that while the recession has tightened budgets, companies are also focusing on using IT to increase efficiency and cost reduction projects. The drawback of this very harsh method is that if employees become affected by the behaviour of the firm, then the firm may suffer from a bad image and from a decrease in productive efficiency in the form of increased absenteeism rates and even increased labour turnover. This would lead to lower profitability for the firm and an increase in fixed costs for training and recruitment in the case of the latter. Human resource strategies adopted in a recession might include adopting flexible employment patterns, such as part-time workers, teleworkers and employees on short-term contracts. They may find that they must make redundant some employees, although this will usually be avoided if possible due to the stigmatisation the firm would receive for doing so and for the avoidance of large redundancy payments (average being �12,000), which will increase the firm's overheads and reduce its profitability. If the firm chose to employ more short-term workers as a proportion of the total workforce then it could benefit from having the option to not renew its workers' contracts if it found that it had decreased demand for labour. ...read more.

While difficult economic circumstances will mean lower bonuses over the next few years, few companies are deciding to abandon their bonus schemes. In Nestle's York factory, Nestl� said it would be irresponsible to raise wages in such tough times, but the unions said another year without a pay increase was unacceptable, especially after staff had helped boost productivity. One of the most drastic strategies that can be adopted in a recession is that of diversifying into a new market. There are great opportunities to be taken advantage of in a recession. Tomlinson, a UK based insolvency practitioners, have seen a marked rise in trade during the past six months. Tomlinson has reported an 8.8% increase in insolvencies in the third quarter of 2008 compared with the second quarter. "We expect the number of personal insolvencies to rise from around 110,000 this year to around 140,000 in 2009 and even further thereafter." This creates a great opportunity for business for their particular line of work - working with clients struggling with insolvency. If a business decided to diversify into an expanding sector in the recession, there would be great scope for high profits from them. Focusing on particular profit centres that are doing well is another way of helping to survive the recession. Although the older brands of the Arcadia empire e.g. Dorothy Perkins and Burton are experiencing decreased sales, the brands aimed at younger buyers are experiencing increases in sales despite the recession. Topshop, Topman and Miss Selfridge have experienced record sales, due to the fact that young people are not being affected by the burden of having a mortgage. ...read more.

*****
This essay contains many good points and covers the ground fully. Most businesses look to reduce their costs and increase their sales at all times but it becomes more acute during a recession and the writer has covered the main points well.