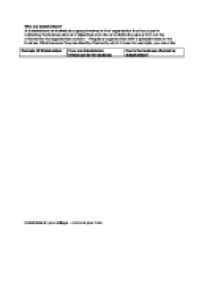 Examples of stakeholders at Tescos

Who are stakeholders? A stakeholder is an individual or group involved in that organisation that has a part in achieving the business aims and objectives and also an individual or group that can be affected by the organisations actions. - People or organisations with a special interest in the business. This is because they are directly affected by what it does. For example, you are a key stakeholder in your college - and so is your tutor. Example Of Stakeholders How are stakeholders influenced by the business How is the business affected by stakeholders? Shareholders Generally a customer wants quality goods at a low cost. They would also want a variety of products to choose from. All customers want these things and by Tesco providing them Tesco will attract more customers because of people talking about it. Tesco like most business' need their customers because they are the business' income as the customers are the people who buy Tesco's products. The customers are similar to a pressure group because they apply pressure to Tesco to meet their needs. Meeting the customer's needs can be things such as expanding their stores or giving more variety on certain products. Tesco have feedback forms in their stores which allow customers to communicate with Tesco and tell how stores can be improved. This makes Tesco a more competitive supermarket. ...read more.

The employees are the people who Tesco pay to provide there service to them. They need a lot of skills and their wages depends on the variety of skills they have. They will work in different areas of Tesco depending on the skills they have. E.G Check outs, bakery, cleaner etc. despite where an employee works they need to have the correct skills to do the job so that they can provide an excellent service for the Tesco customers to attract the customers to shop at the store again. If Tesco notice a particular employee who tries hard at their job and provides an excellent service all the time that employee could get a pay-rise or even a promotion. Tesco need to provide their employees with good working conditions, reasonable hours and treat them fairly because otherwise the employee's will not be happy at their job which could lead to them resigning. If Tesco employees start resigning for negative reasons then word could spread that Tesco have bad working conditions and that employees of Tesco are not treated fairly meaning Tesco may find it hard to find skilled staff. Employees Employees also have a big influence on Tesco because they are the people making Tesco a success because they are the people who go to work every morning stack the Tesco shelves and serve the Tesco customers which makes Tesco its huge profits. ...read more.

Tesco will also want a good value for what they are buying. Example Of Stakeholders How are stakeholders influenced by the business How is the business affected by stakeholders? Children Now I will be describing the different stakeholders involved in influencing the UK's children charity NSPCC, in this description we will get to tell between the main key stakeholders in the charity, and their importance in which they take part within the organisation. NSPCC although being a charity have important stakeholders and those stakeholders include children, funders, trustees, donors, government, and local community. I think that the children have the biggest effect on the company because without them the NSPCC wouldn't have any leads to save the children. If children didn't step up or if they weren't telling anyone that there getting abused and mistreated then it would affect the organisation greatly. Although the children are not donating it's them that the organisation depends on. Donors Donors also have a massive part to play the reason for that is if there was a lack of donors the organisation NSPCC won't be able to succeed in what they had planned, NSPCC obviously had agendas and targets, they need money in order to achieve those targets, and that where the donors come in thus without the donors from generous people the organisation will most likely fail. NSPCC use matter awareness adverts to grab in donors Board of Trustees Trade Union ...read more.