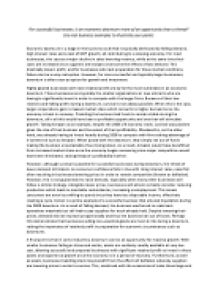 For successful businesses, is economic downturn more of an opportunity than a threat?

﻿For successful businesses, is an economic downturn more of an opportunity than a threat? Use real business examples to illustrate your points. Economic downturn is a stage in the business cycle that is typically attributed by falling demand, high interest rates and a lack of GDP growth, all contributing to a slowing economy. For most businesses, this causes a major decline in sales lowering revenue, while at the same time their costs are increased since suppliers are trying to overcome the effects of low demand. This drastically lowers profit, and for businesses who lack preparation for these market conditions, failure can be a very real option. However, for more successful and typically larger businesses, downturn is often seen as option for growth and investment. Highly geared businesses with low retained profit are by far the most vulnerable in an economic downturn. ...read more.

As a result, Amazon would have benefitted from increased market share once the economy began recovering since major competition would have been eliminated, raising Amazon?s profitability further. However, although survival is possible for successful businesses during downturn, the threat of lower demand still stands. As consumer confidence falls in line with rising interest rates, sales fall often resulting in businesses lowering prices in order to remain competitive (known as deflation). However, this is not guaranteed to raise demand, especially when many other businesses will follow a similar strategy. Alongside lower prices, businesses will almost certainly consider reducing production which leads to inevitable redundancies, increasing unemployment. This means consumers are even less willing to spend since they have less disposable income, effectively creating a cycle. Comet is a prime example of a successful business that entered liquidation during the 2008 downturn. ...read more.

This, combined with the economies of scale these large and successful firms hold, mean that the profit margins on stock can be massively increased, once again improving profit once consumers begin spending again and the economy enters recovery. Overall, I think that for successful firms, downturn is definitely more of an opportunity than a threat. Businesses identified as cost leaderships by Porter are the least likely to suffer a drop in demand since these products and services are typically more essential, whereas businesses following a differentiation strategy are almost certain to suffer drops in demand that can lead to liquidation if unprepared given the products are less of a necessity. When these liquidations occur, competitors gain market share and in oligopolies, competitors can even consider raising prices given the reduced saturation in the market, boosting profit significantly once recovery begins. However, all of this depends on a firm?s ability to carry out strategic planning and forecasting whilst ensuring they have sufficient funds in place to deal with and take advantage of economic downturn. ...read more.