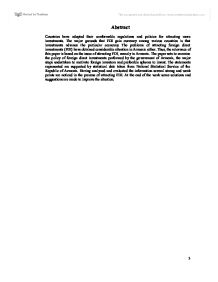 Abstract Countries have adopted their conformable regulations and policies for attracting more investments. The major grounds that FDI gain currency among various countries is that investments advance the particular economy. The problems of attracting foreign direct investments (FDI) have obtained considerable attention in Armenia either. Thus, the relevance of this paper is based on the issue of attracting FDI, namely in Armenia. The paper sets to examine the policy of foreign direct investments performed by the government of Armenia, the major steps undertaken to motivate foreign investors and preferable spheres to invest. The statements represented are supported by statistical data taken from National Statistical Service of the Republic of Armenia. Having analyzed and evaluated the information several strong and weak points are noticed in the process of attracting FDI. At the end of the work some solutions and suggestions are made to improve the situation. Introduction Producers are not gamblers. They just want a good return on their investment. Max von Sydow Ever since the collapse of the Soviet Union Armenia has made a giant step upward to its economy liberalization and enhancement. The Government of Armenia has put big efforts in favor of market-oriented economy formation. Due to adopting fiscal policy and performing the processes of privatization the economy of RA rebounded. In order to encourage trade Armenia became a full member of WTO which is the main motivator for Armenia to have laissez-faire trade. Thus, small and medium enterprise section was opened not only for private but also for foreign direct investments (FDI). The term ''foreign direct investment'' refers to investment of foreign assets into domestic structures, equipment, and organizations (www.econterms.com). Consequently, being an immense economic force FDI deserves the attention of policymakers, business persons as well as society as a whole. Considering the case of developing countries the main motivations for attracting FDI are obvious: development and economic growth. However, FDI's greatest contributions to development lie in its productivity-enhancing functions as it improves export capacity of foreign-invested firms integrating those ...read more.

* IT sector as a strategic sector attracting FDI Having a full understanding of the dynamics of FDI lets consider the particular case of IT sector. After Armenia gained the independence from former Soviet Republic in 1991, the industry switched its focus to the software development and IT services. The government of Armenia has an ambitious national vision for IT and supports the leading role of IT through its. In fact, the software and services segment really gained its drive during the last 10 years, during which the sector grew at 27% per annum. Just for comparison lets consider the fact that the IT industry's weigh in GDP was 1.1%7 whereas in Germany's GDP it was only 1.4% (Armenian Statistical Service). In recent years, IT sector was also observed as major inflow of foreign investors. More than 55% of industry's output is exported over 20 countries in list of which are USA, EU and CIS. Development and competitiveness of IT sector is mainly based on foreign branches of well-known organizations as from the USD 129.9 million of industry total income USD 80.3 million is gained through foreign branches income8. In the majority of cases, the foreign branches of multinational technology firms are development centers for the parent companies. Foreign companies usually setup small development centers, and with an effective operating team in place, they start increasing the number of employees and move into higher value added activities to Armenia. Later, the whole cycle of a company's technical activities including R&D, design, coding, testing, and support, may be moved to Armenia. In addition, some companies have also started relocating a part of their business related functions such as marketing and customer support to Armenia. The practice of sending local professionals to the customer sites outside of Armenia to provide implementation and customer support has become increasingly common Armenia's expertise in High Tech industries has been slowly gaining global recognition thus fostering foreign investments in the sector. ...read more.

3. The responsible institutions should not only be centralized on attracting FDI but also in successful implementation of those investments. 4. It is generally known that the more developed a country is, the better able it is to attract quality FDI. In particular, countries need to strengthen unique national competitive advantages, which would be of particular interest to foreign investors, including brand name recognition. Thus, Armenia should develop such competitive advantages in order to be more attractive to foreign investors. 5. Policies and strategies for the promotion and attraction of FDI should be implemented in conjunction with effective privatization and overall private sector development policies and measures, with emphasis on the development of SMEs. Suggestion While studying the FDI uniqueness in Armenia and taking into consideration the developed conclusions and suggestions the following project is proposed. The Ministry of Economy in cooperation with the RA government as well as domestic producers and Armenian Development Agency should create an online database for business-proposals. In this database will be demonstrated not only the business-plans of existing industries and companies but also strategic development-offers of new industries. The projects should also take into consideration the privatization process. This project will give a chance to attract FDI in long-term and diversify the Armenian economy by directing FDI to perspective but not developed spheres. Conclusion Foreign direct investments are considered to be the powerful force in every economy. Thus every country is eager to attract as more of this pie as possible. For this purpose countries improve their investment climate by providing privileges for foreign investors as well as protecting and supporting them. For a small country like Armenia is, FDI undoubtedly play a major role in Armenia's economy. Taking into account this fact Armenia tries to create trust climate within foreign investors to attract more FDI. Recent economic indicators state that Armenia has a big potential to attract investments, especially considering the case of Armenian diaspora existence. To promote FDI and to diversify Armenian economy is suggested to create online-database for business producers. ...read more.