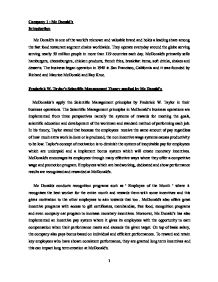 Company 1 : Mc Donald's Introduction Mc Donald's is one of the world's reknown and valuable brand and holds a leading share among the fast food restaurant segment chains worldwide. They operate everyday around the globe serving serving nearly 50 million people in more than 119 countries each day. McDonald's primarily sells hamburgers, cheeseburgers, chicken products, french fries, breakfast items, soft drinks, shakes and desserts. The business began operation in 1940 in San Francisco, California and it was founded by Richard and Maurice McDonald and Ray Kroc. Frederick W. Taylor's Scientific Management Theory applied by Mc Donald's McDonalds's apply the Scientific Management principles by Frederick W. Taylor in their business operations. The Scientific Management principles in McDonald's business operations are implemented from three perspectives namely the systems of rewards for meeting the goals, scientific education and development of the workman and standard method of performing each job. In his theory, Taylor stated that because the employees receive the same amount of pay regardless of how much extra work is done or is produced, the non incentive wage systems causes productivity to be low. Taylor's concept of motivation is to diminish the system of inequitable pay for employees which are underpaid and a implement bonus system which will create monetary incentives. McDonald's encourages its employees through many effective ways where they offer a competitive wage and promotion program. ...read more.

The order is assembled by collecting food from the appropriate machines. McDonald's has developed a standard method of performing each job and the employees can perform efficiently. In conclusion, the Scientific Management Theory became a powerful force as it contributes to increased efficiency in industrial establishments. McDonald's shows the evidence of applying the principles of Scientific Management theory. They train every new crew member scientifically rather than leaving them to train themselves to ensure efficiency among workers. They also implement bonus and extra incentive systems to give encouragement to the employees to perform well to meet their targets. It aims to bring everyone's production efficiency into full play to accomplish optimum profit. Moreover, they cooperate with the workers to ensure that the scientifically developed methods are being followed and it will be eligible to improve the production efficiency. Across the globe, this theory has also made an important contribution to the business world we see today and improvised many areas of management. Taylor's ideology still plays an important role in the current management systems and this has increased and improved production efficiency. Much of the core of Scientific Management remains with us today, where it has been modified, updated and given a human face. Mc Donald's has achieved huge success and has spread worldwide almost in every major city as it has successfully applied the scientific management theory in its business philosophy to reap enormous benefits. ...read more.

They also conduct an annual career discussion with each employee because the company also emphasizes on the development of each employee and has implemented a system of feedback. Feedback is provided from a selection of people with whom the employee works and is a personal development tool. This helps employees to understand their behaviour, strengths and weaknesses within the workplace as others see them. The idea of the programme is to improve individuals and get things done efficiently. All Tesco employees have a Personal Development Plan which they build through their 360 degree feedback and other tools. To help provide oppurtunities for continuous personal development, this enables Tesco managers to offer meaningful feedback to employees. This personal approach helps employees to reach their full potential by encouraging self assessment and providing advancement through ongoing training. It also enables individuals to take responsibility for their development. By building a two way relationship, it will ensure that the employee is committed to the values of the company and that the employee works in partnership with others and helps improve the business for customers. REFERENCES 1) Mightystudents.com 2010, Using Frederick Taylor - Scientific Management, viewed on 20 March 2011, < http://www.mightystudents.com/essay/Using.Frederick.Taylor.58798 >. 2) Newavessays.com 2011, Scientific Management In 21st Century, viewed on 20 March 2011, < http://newavessays.com/service/custom-essay-writing/samples-of-essays/4ej20x/>. 3) Knol.google.com 2009, Mechanistic Organizations : McDonald's, viewed on 20 March 2011, <http://knol.google.com/k/robert-lee/mechanistic-organizations-mcdonald-s/2jqmqvqcae1q6/2#>. 4) Slideshare.net 2011, 2 History Module, viewed on 20 March 2011, <http://www.slideshare.net/lbsun07/2-history-module>. 5) Mbaknol.com 2011, Tesco's Steering Wheel, viewed on 20 March 2011, <http://www.mbaknol.com/management-case-studies/tesco%E2%80%99s-%E2%80%98steering-wheel%E2%80%99-a-tool-for-strategic-value-creation-and-business-transformation/>. CONTENTS Content Page No. Frederick W. ...read more.

****
The writer has clearly understood the theories of Taylor and Mayo and has researched into how McDonalds and Tesco operate but they have not made a strong case that McDonalds follow Taylor and Tesco follow Mayo. They attempt to make the firms follow the theory but the reality for both companies is that they both motivate staff using a range of methods consistent with different theories.