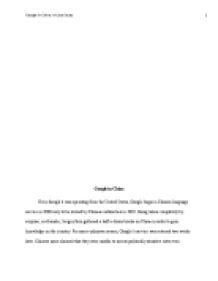 ﻿Google in China: A Case Study Google in China Even though it was operating from the United States, Google began a Chinese language service in 2000 only to be locked by Chinese authorities in 2002. Being taken completely by surprise, co-founder, Sergey Brin gathered a half a dozen books on China in order to gain knowledge on the country. For some unknown reason, Google?s service was restored two weeks later. Chinese users claimed that they were unable to access politically sensitive sites even though Google said they did not change the service. Google came to find that the government censors the results of search engines being used on the Chinese Internet to ensure the information the citizens are seeing is acceptable to the culture. ...read more.

When Google decided to enter the Chinese market, they entered with a self-censorship, which meant that Google was giving ?some information? and not ?all information? by censoring certain political sites. Google broke an ethical rule they set for themselves, which was to not compromise the integrity of its search results. Google blocking certain sites from Chinese users made Google look as though they abandoned their principles in return for a higher profit (Hill, 2009). With Google going global in China, they are held accountable for following all laws set forth by the Chinese government, which means that Google would have to respect the firewall the Chinese government placed between its internet and the rest of the World to block sites that seemed subversive. ...read more.

After realizing this, it was important to management at Google that they enter into the Chinese market. Before entering, management knew they were at a competitive disadvantage with Yahoo! And MSN already in the Chinese market, as well as China?s homegrown company, Baidu, which is China?s largest search market. As far as advertising, this was a huge opportunity for revenue if Google were to enter operations into the market. Conclusion The ?Google in China? case study presented the global business operations of Google entering into the Chinese market. There were many legal, ethical, and culture challenges Google faced while attempting to enter the market without the proper research and knowledge. Strategic and operational challenges were met as well, and overcome with the aid of the Chinese government and the regulations set to ensure the Chinese culture remains. ...read more.