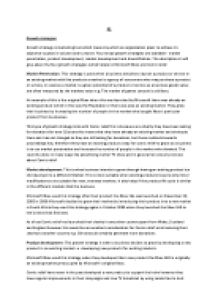 Growth Strategies. The descriptions I will give about the four growth strategies will all relate to Microsoft Xbox and Comic relief.

﻿P1 Growth strategies Growth strategy is marketing tool which means by which an organization plans to achieve its objective to grow in volume and turnover. Four broad growth strategies are available - market penetration, product development, market development and diversification. The descriptions I will give about the four growth strategies will all relate to Microsoft Xbox and Comic relief. Market Penetration: This strategy is used when a business decides to launch a product or service in an existing market with like products a market is a group of consumers who may purchase a product or service, in essence a market is a given potential of a product or service as a business goods value are often measured by the markets value e.g. The market of games console is a billions. An example of this is the original Xbox when this was launched by Microsoft there was already an existing product which in this was the Playstation 2 there was also an existing market. ...read more.

China would certainly generate more donations. Product development: This growth strategy is when a business decides to grow by developing a new product in an existing market i.e. developing new products for existing markets. Microsoft Xbox used this strategy when they developed their new product the Xbox 360 in originally an existing market preoccupied by Microsoft?s original Xbox. Comic relief have never in the past developed a new product to support their aim however they have regular improvements in their campaigns and Live TV broadcast by using celebrities to host and participate in their campaign gradually Comic relief is working its way up to A listers and highest viewing TV shows to help their business e.g. The apprentice and Dragons den in 2009 this is modifying the business model but not launching a new product as a Charity this would be out of the question. Diversification: This is where the business markets a new product to new market developing new product markets outside the existing business. ...read more.

This survival strategy incorporates the brand itself and attempt to orientate it to something positive an example would be In 1991, Volkswagen took a 30% stake in Skoda and started work in training and educating the workforce to Western quality standards. It invested over £2 billion in the plant, research, development and new models. Ten years later, in 2001, VW took total control of the business. This means that for 10 years Skoda despite investing millions failed to use the branding survival strategy to keep their business surviving until obviously it was by Volkswagen. Microsoft Xbox have never been in a position to use a survival strategy this is mainly because it is part of a sub-business Microsoft a billion pound global business and by using Microsoft’s expertise, branding, reliability and overall most importantly image to the customers Xbox have never failed to make beyond the break even therefore branding would have never crossed their minds. Comic relief have always had enormous support from the public and celebrities even when it was founded in 1985 e.g. Lenny Hennry to this day where the government channel BBC host its 4 hour long program. ...read more.