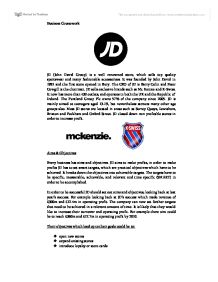 JD (John David Group) is a well renowned store, which sells top quality sportswear and many fashionable accessorises. It was founded by John David in 1981 and the first store opened in Bury. The CEO of JD is Barry Colin and Peter Cowgill is the chairman. JD sells exclusive brands such as Mc Kenzie and K-Swiss. It now has more than 430 outlets, and operates in both the UK and the Republic of Ireland. The Pentland Group Plc owns 57% of the company since 2005. JD is mainly aimed at teenagers aged 13-19, but nevertheless attracts many other age groups also. Most JD stores are located in areas such as Surrey Quays, Lewisham, Brixton and Peckham and Oxford Street. JD closed down non profitable stores in order to increase profit. Aims & Objectives Every business has aims and objectives. JD aims to make profits, in order to make profits JD has to set smart targets, which are practical objectives which have to be achieved. It breaks down the objectives into achievable targets. The targets have to be specific, measurable, achievable, and relevant and time specific (SMART) in order to be accomplished. In order to be successful JD should set out aims and objectives, looking back at last year's success. For example looking back at JD's success which made revenue of �300m and �12.4m in operating profit. The company can now set further targets that need to be achieved in a relevant amount of time. It is likely that they would like to increase their turnover and operating profit. For example there aim could be to reach �360m and �12.7m in operating profit by 2010. Their objectives which lead up to their goals could be to: * open new stores * expand existing stores * introduce loyalty or store cards * introduce wider stock * open concessions * buy out a rival company * update website regularly- online shopping * set individual targets for employees If JD sports were to introduce loyalty or store cards, they could attract potential customers by offering points each time when they spend in store. ...read more.

Due to the fact that there was not a designer driven market at the time as 'de industrialisation' was at its highest, they decided to take a risk and turn it into an advantage this is what people with exceptional enterprise skills do. JD sports was founded in 1981 in John Wardle and David Makin's home town in Bury. By 1983 the fledgling business was expanding into the Arndale Centre in Manchester. According to the 'British Style Genius' One of the main reasons why JD sports became so successful was because of the changing fashions in the 1980's, people wanted to wear sports clothes for trend purposes instead of sport. Tennis players become iconic fashion symbols due to their clothing. Brand names became status symbols for sports gear and sportswear. The appearance of affluence was reinforced by access to designer label goods. They identified and exploited marketing opportunities by providing sportswear that was unique. JD sports also started selling exclusive brands such as K-Swiss and McKenzie to maximise sales as they knew that these exclusive brands were unavailable elsewhere. It all started in Liverpool where street fashion was picked up and put on the high street. Many famous brands such as Adidas originated in Germany, these were international companies, that thought Britain was unable to afford these luxury items of sportswear and accessorises. As Liverpool started becoming more and more involved into the trends that were put in place, it wasn't long before other cities fell into place. Another reason behind the success of JD sports was that its purpose was to sell sports clothing by sports brands; they didn't really concentrate on selling sports equipment. This is what made them different to other sports stores. Team work at JD sports Why are teams important? Teams are important in order to accomplish a set aim or task. It is where individuals come together with other people in order to fulfil a certain goal which requires more than one person. ...read more.

In order for JD sports to benefit from this and increase sales would be to make displays on shop floor look more attractive and appealing so that potential customers and make them female friendly to lure females who are their potential customers to come into JD sports' stores as they will be able to see plenty of varieties and styles to choose from. Is fashion important? Most people agreed that fashion is important and that there should be an even balance between fashion and function. JD sports has already seen this gap in the market and therefore has started selling exclusive brands in order to attract customer, this will help them increase sales Would you prefer to shop at shopping centres? Most people also agreed that they preferred shopping at shopping centres than stand alone stores in not so popular places. JD sports has acted on this as they have stores in Surrey Quays, Westfield White city, and Oxford street which will help them achieve their targets as these places are always busy which make the stores even busier. Conclusion After distributing the questionnaires as a source of primary research, it was evident that JD sports are mostly aimed at females between the ages of 15 and 19. After I realised this I reflected on the appearance of JD sports which is not at all female orientated, fair enough it has a female section in there but the outside appearance is quite masculine. This may have not affected JD sports' sales however if they were to change their appearance to a slight feminine feel this may encourage sales to grow also. Another aspect I realised is that JD sports have exclusive brands which can not be found elsewhere. Therefore JD sports can take advantage of this and introduce more exclusive deals in order to engage customers and increase sales. Opening stores in affluent areas where people are more likely to spend would also be a good idea. ?? ?? ?? ?? Business Coursework ...read more.