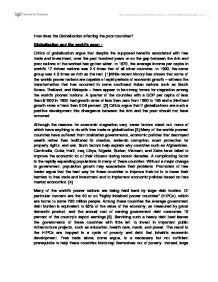 How does Globalization is affecting the poor countries.

How does the Globalization affecting the poor countries? Globalization and the world's poor: - Critics of globalization argue that despite the supposed benefits associated with free trade and investment, over the past hundred years or so the gap between the rich and poor nations of the worked has gotten wider. In 1870, the average income per capita in world's 17 richest nations was 2.4 times that of all other countries. In 1990, the same group was 4.5 times as rich as the rest. [1]While recent history has shown that some of the worlds poorer nations are capable of rapid periods of economic growth - witness the transformation that has occurred in some southwest Asian nations such as South Korea, Thailand, and Malaysia - there appear to be strong forces for stagnation among the world's poorest nations. A quarter of the countries with a GDP per capita of less than $1000 in 1960 had growth rates of less than zero from 1960 to 195 and a third had growth rates of less than 0.05 percent. ...read more.

[4] Many of the world's poorer nations are being held back by large debt burden. Of particular concern are the 40 or so "highly indebted poorer countries" (HIPCs), which are home to some 700 million people. Among these countries the average government debt burden is equivalent to 85% of the value of the economy, as measured by gross domestic product, and the annual cost of serving government debt consumes 15 percent of the country's export earnings.[5] Servicing such a heavy debt load leaves the governments of these countries with little left to invest in important public infrastructure projects, such as education, health care, roads, and power. The result is the HIPCs are trapped in a cycle of poverty and debt that inhabits economic development. Free trade alone, some argue, is a necessary but not sufficient prerequisite to help these countries bootstrap themselves out of poverty. Instead, large scare debt relief is needed for the world poorest nations to give them the opportunity to restructure their economies and start the long climb toward prosperity. ...read more.

The IMF and World Bank have now picked up banner and have embarked on a systematic debt relief program. For such a program to have a lasting effect, however, debt relief must matched by wise investment in public projects that boost economic growth (such as education) and by the adoption of economic policies that facilitate investment and trade. The rich nations of the world of the world also can help by reducing barriers to the importation of products and textiles. High tariff barriers and other impediments to trade make it difficult for poor countries to export more of their agricultural production. The World Trade Organisation has estimated that if the developed nation of the world eradicated subsides to their agricultural producers and removed tariff barriers to trade in agriculture this would raise global economic welfare by $128 billion, with $30 billion of that going to developing nations, many of which are highly indebted. The faster growth associated with expanded trade in agriculture could reduce the number of people living in poverty by as much as 13% by 2015, according to WTO. [7]. ...read more.