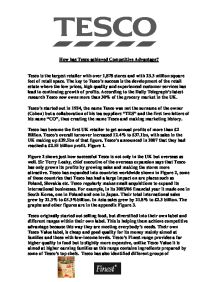 How has tesco achieved Competitive advantage

How has Tesco achieved Competitive Advantage? Tesco is the largest retailer with over 1,878 stores and with 23.3 million square feet of retail space. The key to Tesco's success is the development of the retail estate where the low prices, high quality and experienced customer services has lead to continuing growth of profits. According to the Daily Telegraph's latest research Tesco now owns more than 30% of the grocery market in the UK. Tesco's started out in 1924, the name Tesco was not the surname of the owner (Cohen) but a collaboration of his tea suppliers "TES" and the first two letters of his name "CO", thus creating the name Tesco and making marketing history. Tesco has become the first UK retailer to get annual profits of more than �2 Billion. Tesco's overall turnover increased 12.4% to �37.1bn, with sales in the UK making up �29.5bn of that figure. Tesco's announced in 2007 that they had reached a �2.55 billion profit. Figure 1. Figure 2 shows just how successful Tesco is not only in the UK but overseas as well. Sir Terry Leahy, chief executive of the overseas expansion says that Tesco has only grown its profits by growing sales and making the stores more attractive. ...read more.

Against Tesco is cheaper Tesco is the same price Tesco is more expensive Based on no. of lines found NO. OF PRODUCTS NO. OF PRODUCTS NO. OF PRODUCTS NO. OF PRODUCTS Asda 1498 4636 1125 7259 Sainsbury's 3304 4591 664 8559 Morrisons 2300 3170 737 6207 Tesco must be one of the very few supermarkets to contain major diversification throughout its stores. They offer car insurance, kitchenware and household appliances. They are also thinking of expanding and opening separate stores for each extra service they offer E.g Tesco Car Insurance. Tesco's competitive advantage has been achieved also by its all-famous slogan "Every Little Helps". And they're branding all their products with their striking and bold logo. Which is easy to recognise and remember. Their other effective way of advertising is using famous celebrities to promote their store. In the past they have Prunella Scales, the well-known actress who played Sybil in Fawlty Towers. This was effective because she was funny and showed her devotion to the store. Recently however Tesco has got the Spice Girls entering their store and buying presents for one another. This again is effective for both Tesco, because it shows that even they turned to Tesco for their Christmas presents. But also it coincides with their reunion tour. ...read more.

This is another marketing strategy for Tesco and it encourages loyalty in their customers. They get their competition from other leading stores such as Sainsbury's they need to see Threats in the future Tesco's main threat and competition is Morrisons because, similarly to Tesco have a wide range of products also at very cheap prices, some even cheaper than Tesco. They also have their own brand and stock more than just food and groceries; they also sell make-up sets and toys. However they do not sell clothes and the distribution of their shops are based mainly in the city not locally. They also aren't as wide spread as Tesco and have just the one Morrison shop. Another threat for Tesco is the bad publicity they have been receiving about expanding even more. There have been complaints that it is getting too big, which are causing other shops to close. This could create a public backlash because people want their small local shops to still be in business. But the expansion of Tesco has created over 7000 jobs. The new jobs will be a mixture of full and part-time and will include delivery and in-store work. But Tesco has addressed these problems with flair and initiated a "Good Neighbour Policy". Tesco has redesigned many shop fronts to make them less obtrusive and more in keeping with their surroundings and is currently reviewing noise levels and delivery patterns to stores. We chose the stores Top of Form ...read more.

****
This is well applied and the writer has clearly found out some things about Tesco. The essay could be improved with a better structure, including a systematic analysis of Tesco's marketing mix, and their competition.