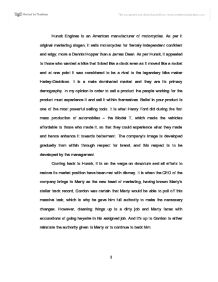 Hunsk Engines is an American manufacturer of motorcycles. As per it original marketing slogan, it sells motorcycles for fiercely independent confident and edgy; more a Dennis Hopper than a James Dean. As per Hunsk, it appealed to those who wanted a bike that ticked like a clock even as it moved like a rocket and at one point it was considered to be a rival to the legendary bike maker Harley-Davidson. It is a male dominated market and they are its primary demography. In my opinion in order to sell a product the people working for the product must experience it and sell it within themselves. Belief in your product is one of the most powerful selling tools. It is what Henry Ford did during the first mass production of automobiles - the Model T, which made the vehicles affordable to those who made it, so that they could experience what they made and hence enhance it towards betterment. The company's image is developed gradually from within through respect for brand, and this respect is to be developed by the management. ...read more.

Based on Marty's strategy, I think Hunsk is not the only company to go back to its roots to secure its lost identity. A current example of that would be Citigroup. Although, operating in a completely different industry compared to Hunsk, it recently revived its slogan from back in days which many of us would gladly remember, "Citi never sleeps". In the mist of a financial turmoil it seems to have brought back this slogan to reestablish its identity, on which it banked on its major business and which made the company a financial powerhouse. Hunsk on the other hand also seems to be facing turmoil and in order to get it act to together and secure its position just like the golden days, I think a serious evaluation of the company's strategy is to be considered. Marty's vision and commitment gives an illusion of the same and more. However, it is up to Gordon to look after the best interest of the company and its employees. Handing over such power could go through anyone's head and a close tab on actions and decisions made is certainly needed. ...read more.

Marty's job is undoubtedly an uphill task and there have been several unsuccessful attempts by his predecessors. Given the power that Marty has received, I think he could go a bit overboard in his mission. The only person to curtail or rather closely monitor and approve actions should be Marty himself. As far as Gordon is concerned he has rest assured his full faith support to Marty from the day one, restricting Marty's actions would be contradicting to his own words and a threat of him losing his power of entrustment. However, Gordon is still the captain of the ship which is being steered away by Marty, so Gordon could and should intervene if needed. From Marty's perspective, he should be more careful in applying his decisions and should cautiously evaluate and analyze it with an authoritative figure within the company. It does not really have to be consulting with Gordon, but rather the other department heads and vice presidents. By doing this he is not only rationalizing his decisions, but also gaining approval or more like a second opinion. By taking this approach would not make him any less of what he is, but instead include others in his vision for the turnaround for the company. ?? ?? ?? ?? 1 ...read more.