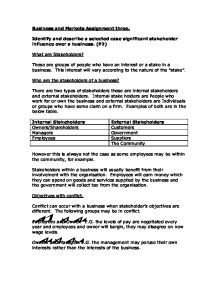 Identify and describe a selected case significant stakeholder influence over a business. (P2)

Business and Markets Assignment three. Identify and describe a selected case significant stakeholder influence over a business. (P2) What are Stakeholders? These are groups of people who have an interest or a stake in a business. This interest will vary according to the nature of the "stake". Who are the stakeholders of a business? There are two types of stakeholders these are internal stakeholders and external stakeholders. Internal stake holders are People who work for or own the business and external stakeholders are Individuals or groups who have some claim on a firm. Examples of both are in the below table. Internal Stakeholders External Stakeholders Owners/Shareholders Customers Managers Government Employees Suppliers The Community However this is always not the case as some employees may be within the community, for example. Stakeholders within a business will usually benefit from their involvement with the organisation. Employees will earn money which they can spend on goods and services supplied by the business and the government will collect tax from the organisation. Objectives with conflict. Conflict can occur with a business when stakeholder's objectives are different. The following groups may be in conflict. Employees and Owner. E.G. the levels of pay are negotiated every year and employees and owner will bargin, they may disagree on new wage levels. Owners and Managers E.G. the management may peruse their own interests rather than the interests of the business. Customers will want lower prices and the business will want higher prices for higher profits. Suppliers, Managers and Owners and E.G. the suppliers may increase their prices and the owners and managers may want the original and lower price to ensure their profits. Owners and Community E.G. the owners may not protect the environment, their local community with could anger them. Stakeholder Concept Recently their has been a wide range of goals which have been suggested for a business. These goals include traditional maximization along with others including goals relating to earnings per share, total sales and manager satisfaction. ...read more.

The customers of marks and Spencer welcomed this change and it meant a percentage increase in sales of Fairtrade Tea and Coffee by 5%, throughout the year. New Fairtrade products will also appear in Marks and Spencer's food hall's in February 2007 with the introduction of Fairtrade wines from Argentina, South Africa and Chile. M&S will also convert all of its pineapples, sugars in its 13 jams/marmalades to Fairtrade as well as all the sugar in its 13 jams and marmalades to Fairtrade. All of this adds to the Fairtrade fresh produce, honey, nuts and chocolate it already sells. From June 2005 onwards marks and Spencer's are only going to sell 100% Fairtrade Tea and Coffee in the caf� Revive. Food Miles Marks & Spencer has become the latest food retailer to react to growing consumer enthusiasm for local food and concerns over climate change. Typically it is taken to mean the distance travelled to move food from the place it is produced to the store where it's bought. But increasingly the definition goes wider, to include issues like locality, freshness, use of preservatives, packaging, choice, support for UK farmers and quality. Marks and Spencer are contributing to this important debate by funding a four-year post-graduate research project on food miles at the University of Surrey. Marks and Spencer's CSR Report for 2006 The point of this report is to inform individuals of marks and Spencer's CSR policies, "we listen to the views of our stakeholders." For the last few years, research has shown that our customers believe that CSR is very important for us. For example, in August 2005, 97% of our customers said that it was important that we operate responsibly in all that we do. This year we also saw a new customer expectation emerging, with 78% of them saying that they'd like to know more about the way our goods are produced, from standards for animal welfare and fish sourcing to the prices paid to producers in the developing world. ...read more.