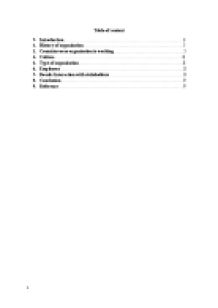 In this analysis of Boeing we will analyse various structure of organisation, management, chain of command, production range, marketing strategy

May 9, 1917 the company was renamed the Boeing Airplane Company. William Boeing was studying at Yale University and then worked briefly in the timber industry, where the rich and gain knowledge about the manufacture of airplanes. Boeing was pressed into service during World War 1, and would continue as a military supplier throughout its history. During World War 2, Boeing builds a huge number of bombers. Many of those who work while the workers were women whose husbands have gone to war. In early March 1944 production was expanded, and each month produced more than 350 aircraft. To prevent the attack from the air, the roofs were covered with green plants and rustic items. In these war years, major airline companies in the U.S. combined. Developed by the Boeing B-17 bomber is also going to the factories Lockheed Aircraft Corporation and Douglas Aircraft Co and Glenn L. Martin Company. Become a leading producer of military and commercial aircraft. Undertook a series of strategic mergers and acquisitions to become the world?s largest most diversified aerospace company. Aerospace pioneers now part of the Boeing enterprises include: North American Aviation Mc Donell Douglas Rockwell International (space and defense business) ...read more.

7. Boards Interaction with stakeholders. The CEO and other corporate officers are responsible for establishing effective communications with the company`s stakeholders, including shareholders, customers, communities, employees, suppliers, creditors, governments and corporate partners. It is the policy of the Boeing that management speaks for the company. This policy doesn`t preclude independent directors from meeting with stakeholders, but it is the norm that, where appropriate, directors notify and consult with management before any such meeting. 8. Conclusion. Boeing is one of the world oldest and biggest aerospace companies. They produce various aircraft models for both citizen aviation and military aviation, and to this day Boeing is counted as a mark of quality, if a plane is made under that companies brand, it will serve the buyer for a long period of time. What may happen with Boeing in nearest future? So far the company was competitive and it does not seem that it is ready to give up. Boeing has all of the resources, knowledge, experience, skilful staff to make new planes and further evolve, as the worlds major aerospace company. 9. Reference: Browaeys, MJ. And Price, R. (2008) Understanding Cross Cultural Management, Prentice- Hall, London Eden, Paul, ed. Civil Aircraft Today: The World's Most Successful Commercial Aircraft. Amber Books Ltd., 2008 "Boeing. Annual Report 2010" (PDF). ...read more.