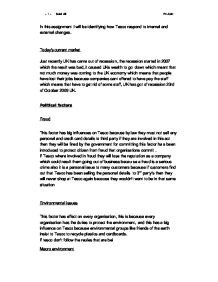 Just recently UK has came out of recession, the recession started in 2007 which the result was bad, it caused UKs wealth to go down which meant that not much money was coming to the UK economy which means that people have lost their jobs because companies cant offered to have pay the staff which means that have to get rid of some staff, UK has got of recession 23rd of October 2009 UK.

Macro environment is the external actions and development over which Tesco don’t have control over, such as changes in customer’s minds if they don’t want to shop at Tesco, then Tesco can’t do anything to make them shop at Tesco.

Technology changes so every time a new gadget Tesco must have it in stock or they are not offering a good customer service for this Tesco needs to speed up the transportation so that the products can be their on time for their customers.

This is meant by people living with each other such as 1981 around 7 to 8 people used to live in one house hold but within the 21centry around 2 to 4 people live in one household this means less products are being brought but also it means there are more houses which means that more are people are buying house hold products.

Just two years ago unemployment was three million which in result was companies closing down such as Woolworths because of recession, the recession can effect Tesco as well trough if theirs not that much money coming within Tesco supermarket then it means that Tesco will have to close some of their supermarkets which will in result people losing their job

Many different organisations gather information through different ways, Tesco gather the information over the loyalty cards, (club cards) which give them information about their customers the benefit of this is customers are able to select promotional messages they want to receive the disadvantage is there is a potential for fraud e.g. cloned credit.

Tesco has many competitors such as Asda, Sainsbury’s and Morrison’s; Tesco needs to keep an eye on their competitors about the prices, the products they sell and the services they offer by them doing this they bring changes to their business because of their competitors

This is meant by having new section within the supermarket such as Tesco has a new cafeteria for customers that have been shopping at the stores.

This has a major effect on Tesco because they have some items which they borrow to run their business so if the interest rate for borrow the item goes up then they will have to pay more money to borrow that item they want to borrow which will in result them spending more money which means they will be losing money.