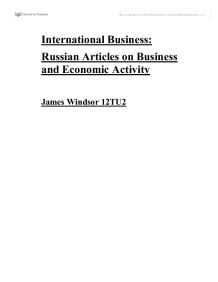 International Business: Russian Articles on Business and Economic Activity James Windsor 12TU2 Demand for Russian MBA's drops The demand for the Master of Business Administration courses in Russia has dropped over the past year by 50%. This comes as a surprise as there were a number of discounts and flexibility programs to combat the effect the recession would have on the program. The extreme drop in MBA applicants is being blamed on employers cuts in employee's education expenses due to the economic downturn as 90% of MBA applicants are funded by their companies. Pavel Ulukaev- Director of MBA and business education programs at the Plekhanov economic academy is an example of this as his former employer paid half of the $15,000 course fee for his MBA. However he has now claimed that experience is more valuable to a majority of businesses, a claim which is backed up by Mikhail Zhukov the CEO of recruitment firm Head Hunter. Overall the MBA is still considered a very well respected qualification and applications are predicted to rise again in 2010 as the Russian economy recovers. Positives to US and Russian Business Alliance Barack Obama is set to ask Russia to remove trade barriers, At talks in Moscow with President Medvedev. ...read more.

A central location with landmark views used to be most popular amongst businesses and was near impossible to gain but now they are readily available. Millionaire Fair Held In Russia Despite Recession Moscow recently hosted the world renown Millionaires fair even despite a report from Merrill Lynch stating that the wealth of the worlds top earners has fallen by a fifth . The overall number of millionaires in Russia has dropped by a third overall due to the recession. The risky stock market is driving rich individuals into making more risky investments than usual and loosing more money. This has lead to an increase in the amount of people investing in commodities such as Gold. A number of investors are also ignoring the traditional options of investing in coins and memorabilia and investing in Jewellery and art instead as it is thought that they hold their value better. However Russia's big spenders have earned an image as good businessmen with high quality asset management and therefore most reports lead towards the view that they will be fine in the long run. Despite the recession, Merrill Lynch estimates that appetite for risk-taking is slowly returning. But far from what it used to be. Its estimated that over the next four years the wealth of the rich will grow by only 8% annually. ...read more.

Earlier Sberbank's deputy CEO did not say that the deal was by any means complete. This raised further speculation about a possible Opel acquisition by a Chinese company. The talks with GM are currently continuing. GM had this to say on the issue; "The deal can't be cancelled as it has not yet been concluded. If the new terms are sufficient for our bank, the deal may be agreed in September, while the preliminary agreement may be signed in July." Russian Prime Minister Criticizes Rising Supermarket Prices The Russian government may soon control retail prices in Russia. A new piece of legislation on retail business in Russia to be finalised in the next ten days. According to a recent survey, 75% of Russians view growing prices as the countries biggest problem. The supermarkets were highlighted as a main problem in the issue Russia's Prime Minister interrupted the Cabinet meeting on Wednesday and made an unexpected visit to a Moscow's supermarket to check the prices for certain grocery items. After returning to the White House, Putin called for a joint effort to control food prices. The reasoning behind the issue is that in the economic situation many people have received slashed incomes however at the same time food prices have stayed the same and in some cases even risen. Which the Russian Prime Minister has classed as "Social Injustice" ...read more.