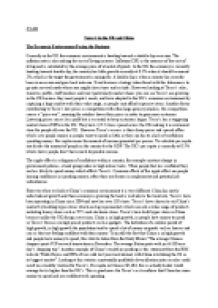 International Business. Tescos in the UK and China The Economic Environment Facing the Business

﻿P5-M2 Tesco?s in the UK and China The Economic Environment Facing the Business Currently in the UK the economic environment is heading towards a double dip recession. The inflation rate is also making the cost of living increase. Inflation (CPI) is the measure of the cost of living and is calculated by the average price of a basket of goods. In the UK the economy is currently heading towards double dip, the country has little growth currently at 0.5% when it should be around 2%, which is the target the government is aiming for. A double dip is when a country has recently been in recession and goes back into one. Usual business strategy when faced with this dilemma is to go into survival mode where you might close stores and cut jobs. However looking at Tesco?s sales, turnover, profits, staff numbers and most particularly market shares you can see Tesco?s are growing in the UK because they meet people?s needs, and have adapted to the UK?s economic environment by capturing a huge market with their value range, as people cant afford expensive items. Another factor contributing to Tesco?s low prices is competition with other large grocery retailers, this competition causes a ?price war?; meaning the retailers lower their prices in order to gain more customers. ...read more.

The UK’s inflation rate was measured in November at 4.8% down 0.2% from the month before. The cost of living is higher in the UK than in Chinas due to a combination of factors; such as in the “UK unemployment rose by 118,000 in the three months to November to 2.685 million, the highest level since summer 1994”. Another major factor affecting inflation rates in the UK is the price for fuel at almost £1.40 per litre. This is affecting the UK’s standard of living as it is costing us more to be accessible with our cars. The problem with fuel being so expensive is far more excessive than just with people driving cars, train prices are increased “An open return train ticket from Coventry to Manchester went up 20% in price in the last 12 months” taken from the BBC website. In the UK fuel prices are very high which means it costs Tesco’s more to transport goods store to store. If the distribution costs are increasing it means that customers have to pay more for the goods. Because the cost of fuel is high and rising it means people find it less accessible to get to the stores and will therefore buy less or shop closing to their homes in different stores. ...read more.

The ripple effect can shrink or grow GDP, good confidence; people start spending more and more GDP grows, bad confidence; GDP shrinks more and more. Examine issues involving global interdependence that affect the business. Global interdependence is mutual depend at a global level. One country depends on another country for something and that country may depend on another country, which creates global interdependence. Tesco?s like many other grocery chains companies source its goods from different countries. Tesco?s import TV?s from China as their manufacturing is cheap. They import kiwis from New Zealand because they grow well in that specific country. This example of Tesco?s importing good shows that they are dependant on other countries. This in turn means Tesco?s are vulnerable to suppliers because if for example China demanded more money for their TV?s Tesco?s would have to pay more, but the customers buying the TV would have to pay the high price ultimately. Another factor in Tesco?s interdependence is the chance of a global disaster which could affect supplies from an affected country resulting in higher prices to import goods. In conclusion there are similarities and differences for both the UK and China?s economies. However Tesco?s success is dependant on how they strategise to suit the countries economy. This and focusing on the needs and wants of customers has made them the global retailer they are today. ...read more.