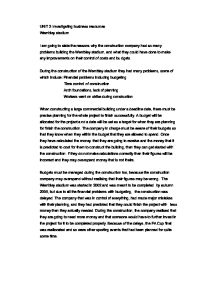 I am going to state the reasons why the construction company had so many problems building the Wembley stadium, and what they could have done to make any improvements on their control of costs and budgets.

During the construction of the Wembley stadium they had many problems, some of which include: Financial problems including budgeting

Workers went on strike during construction

When constructing a large commercial building under a deadline date, there must be precise planning for the whole project to finish successfully. A budget will be allocated for the project and a date will be set as a target for when they are planning for finish the construction. The company in charge must be aware of their budgets so that they know when they within the budget that they are allowed to spend. Once they have calculated the money that they are going to receive and the money that it is predicted to cost for them to construct the building, then they can get started with the construction. If they do not make calculations correctly then their figures will be incorrect and they may overspend money that is not theirs.

Budgets must be managed during the construction too, because the construction company may overspend without realising that their figures may be wrong.  The Wembley stadium was started in 2002 and was meant to be completed by autumn 2005, but due to all the financial problems with budgeting, the construction was delayed. The company that was in control of everything, had made major mistakes with their planning, and they had predicted that they could finish the project with less money then they actually needed. During the construction, the company realised that they are going to need more money and that someone would have to further invest in the project for it to be completed properly. Because of the delays, the FA Cup final was reallocated and so were other sporting events that had been planned for quite some time.

The cost of the project ran up into £757 million making it the most expensive sporting arena in the world. Because of the delay, the price of the stadium has climbed. The break down of the costs is as follows, £325m to build the stadium

Because the contract with multiplex constructions UK is a fixed price, the cost of anything overrun will be held responsible by them too. The project was supposed to be value for money and the stadium was supposed to be running at a profit but the building has yet to break even.

The consequences of not controlling budgets meant that Multiplex made huge financial losses. They had to run into their contingency fund which they would not have wanted to do. Also extra money had to be spent on penalty clause because the deadline was way over, extra money would have been paid for the extra delay in construction.