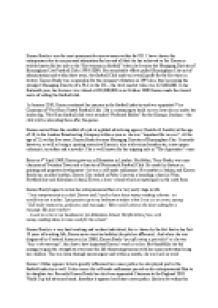 Karren Brady is one the most prominent businesswomen within the UK.

ï»¿Karren Brady is one the most prominent businesswomen within the UK. I have chosen this entrepreneur due to my personal admiration for her and all that she has achieved so far. Karren is widely known for her role as the “first woman in football” when she became the Managing Director of Birmingham City Football Club (1993-2009). Her remarkable efforts pulled Birmingham City out of administration and within three years, the football Club made an overall profit for the first time in history. Karren Brady was responsible for the company's flotation in 1997 also, thus becoming the youngest Managing Director of a PLC in the UK – the stock market value was £25,000,000. In her thirteenth year, her business was valued at £82,000,000 so in October 2009 Karren made the shrewd move of selling the football club. In January 2010, Karren continued her journey in the football industry and was appointed Vice Chairman of West Ham United Football Club. She is continuing to build success here also as under her leadership, West Ham football club were awarded “Preferred Bidder” for the Olympic Stadium – the club will be relocating there after the games. ...read more.

Karren Brady is a very hard working and resilient individual; this is shown by the fact that in her first 13 years of working life, Karren never went on holiday (despite her affluence). And when she was diagnosed by Cerebral Aneurysm (in 2006), Karren Brady ?put off seeing a specialist? as she was ?busy with meetings?, this shows how important Karren?s work is to her. But thankfully she did manage to gain the strength to overcome this life threatening trauma with her main motivation being her children. This was done through neurosurgery and within a month, she was back in work. Karren?s father appears to have greatly influenced her career path as he also played part in the football industry as well. It also seems the self-made millionaire passed on his entrepreneurial flair to his daughter too. Recently Karren Brady has also been appointed Chairman to the England 2018 World Cup bid advisory board; therefore it appears her future career path is likely to be within this industry. ...read more.

The tax received from the sale of Birmingham City would?ve economically pleased the Government very much. The millions of pounds gained are likely to have been used for a good cause such as investment in public services perhaps. And as her achievement involved a football club (a long lasting business), her intellect that had been branded into the business was a long term benefit that will remain with the club, as ticket sales are generated on a regular basis, for much time. As well as keeping the business afloat, and saving hundreds or maybe thousands of Birmingham City related jobs, Karren also now works to help improve businesses. In the current economic climate, individuals such as Karren, help keep many jobs and boost the opportunities for businesses by improving competitiveness. And more indirectly, Karren Brady has helped the UK economy by inspiring other women to be bold enough to earn a living derived from male dominated environments, particularly mothers likewise to Karren Brady. This has meant that less money is drawn through the UK benefit system. ...read more.