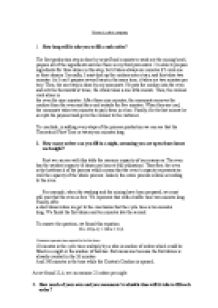 Kristen Cookie Company - planning our production and deciding whether we should offer discounts.

﻿Kristen?s cookie company 1. How long will it take you to fill a rush order? The first production step is done by myself and consists to wash out the mixing bowl, prepare all of the ingredients and mix them in my food processors. I?m able to prepare ingredients for three dozen in this step, but it takes always six minutes if I cook one or three dozens. Secondly, I must dish up the cookies onto a tray, and this takes two minutes. As I can?t prepare several trays in the same time, it takes me two minutes per tray. Then, the next step is done by my roommate. He puts the cookies into the oven and sets the thermostat at timer, the whole takes a one little minute. Then, the cookies cook alone in the oven for nine minutes. After these nine minutes, the roommate removes the cookies from the oven and they cool outside for five minutes. When they are cool, the roommate takes two minutes to pack them in a box. Finally, for the last minute he accepts the payment and gives the cookies to the customer. ...read more.

So if the demand is so strong that it can't be met, the production capacity is insufficient and it would be quite interesting to rent an additional oven. What if the ingredients are different for each dozen? For the mixing stage, preparing 3 dozen with the same ingredients at one time was possible, but if the orders are such that 3 successive dozen have different ingredients, you can't prepare it at one time; you must do the mixing stage 3 times. Therefore, the total capacity for the food processor would be 10 dozen/hour instead of 30. In the same way, the total capacity for ?myself? would be 7.5 dozen/hour instead of 15. Consequently, it's no more the oven's capacity which is the weakest, but it's ?myself?. I become the bottleneck and the whole process capacity would be then 7.5 dozen / hour. That means that the cycle time would be 8 minutes. In this case, an additional oven means a cycle time of 8 minutes instead of 10, and a capacity of 7.5 dozen/hour instead of 5. That looks not so more interesting to rent an oven. So before taking a decision, I would recommend to examine carefully the demand and determine if there are many people who order several dozen with same ingredients at one time or not. ...read more.