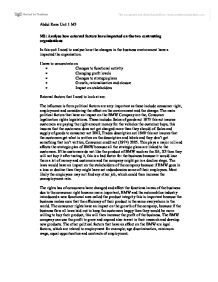 M3: Analyse how external factors have impacted on the two contrasting organisations

M3: Analyse how external factors have impacted on the two contrasting organisations In this unit I need to analyse how the changes in the business environment have a impacted the organisation. I have to concentrate on * Changes to functional activity * Changing profit levels * Changes to strategic plans * Growth, rationalisation and closure * Impact on stakeholders External factors that I need to look at are: The influence is from political factors are very important as these include consumer right, employment and considering the effect on the environment and the change. The main political factors that have an impact on the BMW Company are the, Consumer legalisation rights legislations. These include: Sales of goods act 1975 this act insures customers are paying the right amount money for the vehicles the customer buys, this insures that the customers does not get charged more than they should of. Sales and supply of goods to consumer act 2002, Trades description act 1968 this act insures that the customers get what is written on the description and labels and they don't get something that isn't written, Consumer credit act (1974) 2005. This plays a major roll and affects the strategic plan of BMW because all the strategic plans are linked to the customers. ...read more.

But it will affect the growth of the organisation and their human resources development will be hard to recruit new police officers, as the perception of the police will not be very good. Police in protest rally over pay Officers want their rise backdated to match Scottish colleagues An estimated 22,500 police officers have marched in central London in a protest over pay. Police are angry that a 2.5% pay rise was only backdated to 1 December for UK officers except for those in Scotland. Prime Minister Gordon Brown said he would have liked to pay more but it was part of the "fight against inflation"..... Both the Met Police and the Police Federation estimated that 22,500 officers had joined the march. Only a small number of uniformed officers had been deployed to man what was largely a quiet and orderly protest. Officers from Scotland showed support for their colleagues by taking part, as did some from higher ranks, including superintendents. http://news.bbc.co.uk/1/hi/uk/7203839.stm This shows the strike that met police employees took in order to increase there wages and finance. The 3rd influence is the social factors. The changes that come under social factors are: hosting of major sporting or cultural events, aging population and celebrity culture. This includes all the sponsorships that BMW does. ...read more.

This will solve the crimes because of the latest technology and more efficiency. New fingerprint technology success For the first time in over 100 years of fingerprint searching, the Metropolitan Police Fingerprint Bureau now has the capability to electronically search palm marks left at the scenes of crimes. Following an upgrade to the fingerprint searching system on 1 March 2006 the Met had its first success using the new technology when it identified a palm mark left on the outside of a stolen motor vehicle on 2 March. The vehicle had been used in a burglary and abandoned some 20 miles away from the scene of the crime. After the palm mark was identified, the marks from the burglary where also checked and identified to the same suspect. A man serving a prison sentence for a completely different offence has know been charged with burglary and the theft of the motor vehicle. The bureau has, since the upgrade, identified over 140 scenes of crime palm marks so far. http://cms.met.police.uk/news/policy_organisational_news_and_general_information/crime_statistics/new_fingerprint_technology_succes From this we can tell that Met police are trying to improve the technology resource and identify the criminals that have committed a crime from 20 miles from the scene of the crime. Also the Met police are improving and upgrading their technology. ?? ?? ?? ?? Abdul Rana Unit 1 M3 ...read more.