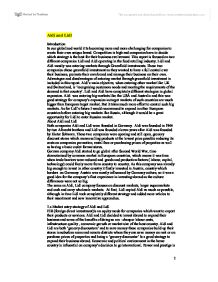 Market entry strategy of Aldi and Lidl. Plans for expansion.

Aldi and Lidl Introduction In our globalized world it Is becoming more and more challenging for companies to create their own unique brand. Competition is high and companies have to decide which strategy is the best for their business evolvement. This report is focused on two different companies Lidl and Aldi operating in the food retailing industry. Lidl and Aldi mostly was entering markets through Greenfield investments. These two companies chose greenfield investment as they wanted to have a full control over their business, promote their own brand and manage their business on their own. Advantages and disadvantages of entering market through greenfield investment is included in this report. Aldi's main objective, when entering other market like UK and Switzerland, is 'recognising customers needs and meeting the requirements of the demand in that country'. Lidl and Aldi have completely different strategies in global expansion. Aldi was entering big markets like the USA and Australia and this was good strategy for company's expansion as target markets of such countries are much bigger than European target market. But it takes much more effort to control such big markets. As for Lidl's future I would recommend to expand in other European countries before entering big markets like Russia, although it would be a great opportunity for Lidl to enter Russian market. About Aldi and Lidl Both companies Aldi and Lidl were founded in Germany. Aldi was founded in 1946 by two Albrecht brothers and Lidl was founded eleven years after Aldi was founded by Dieter Schwarz. These two companies were opening and still open, grocery discount stores which means selling products at the lowest price possible reducing ...read more.

Such investment was primarily considered by Aldi and then by lidl because the companies wanted to promote their own brand, and they promoted their names in the host countries. These companies did not need to share any profit with anyone else as well as controlled and operated their business and organizational culture in their own way and in the way they wanted it to. They also created new production capacity and linkages to the global marketplace. For the host countries where Lidl and Aldi invested, greenfield investment was beneficial as such investments create new job opportunities , the companies invest in research and development and invest in additional capital programs. Disadvantages of greenfield investment Although starting from the scratch ( investing through the Greenfield type investment) was not easy for them. Aldi and Lidl did not understand anything about the host country's culture, market or country's regulations in which they wanted to invest. Investing in the host country through the Greenfield investment was also risky because the companies did not know how well local companies were established in the country, they did not understand how did everything work in that country , so it took a long time for them getting to know that country. So reactive reasons ( actions for getting the information about the foreign market) were not enough to get understanding of the foreign market. Also Greenfield investment costs much more than cross-border acquisition investment, so mostly only big companies ( like Aldi and Lidl) which can invest good amount of money in another country can afford to invest through the Greenfield investment. ...read more.

Slovenia � Spain � Switzerland � USA As from the map it is clear that Lidl was mostly focusing on Western countries, so I would recommend to enter Baltic countries markets and other Eastern European countries first. There is no Aldi in Baltic countries as well, and if talking about these countries markets they are not as competitive as other European countries. So it would be a great opportunity for Lidl. Entering the Baltic countries markets and other Eastern European countries would help Lidl to gain recognition of European countries as 'strong brand throughout Europe'. Afterwards, I would recommend to enter Russian market. Russia is the biggest country in the world and target market is huge. Russia doesn't have very competitive market and supermarkets, I would say , would become very popular over there. Also Aldi doesn't have any store there. Although this country's culture differs from other European countries and at first it would very challenging for Lidl. Conclusion To conclude with, the grocery retailing industry will always be profitable, especially knowing that worldwide annual sales volume of� 3.7 trillion in 2007 and an average annual sales growth is 2.7 percent during the past ten years. And it is obviously the most important sector in the world as people cannot survive without food , drinks and other groceries. Although companies operating in this sector and considering going global must decide which strategy would be best for their expansion, promotion and prosperity. Lidl's and Aldi's expansion became very successful and for the future these two companies must consider their expansion very carefully to achieve their goals and enlarge their revenues. ?? ?? ?? ?? 1 ...read more.